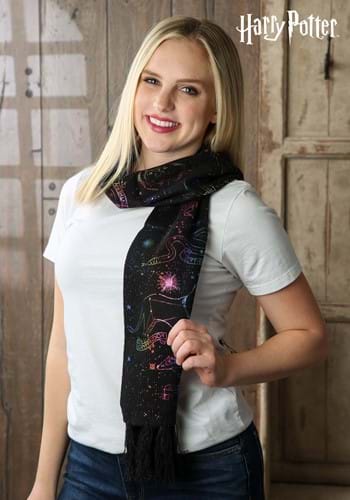 It may not have been written in an acceptance letter, but it was written in the stars. You were meant to attend Hogwarts School of Witchcraft and Wizardry. From a young age, you looked up to the night sky, divining its secrets through the planets and the stars' patterns. You could read people like a book just by learning their birthdate. A fledgling wizard when it came to astrology, however, for the first time, you couldn’t believe your eyes when a letter from Hogwarts didn’t land in your lap for your 11th birthday. But that won’t stop you from always declaring your allegiance or magical prowess.

Wrap yourself up in the comfortable idea that you were just too good for the iconic wizarding school with this Hogwarts House Emblem Constellation Knit Scarf! Featuring dreamy representations of each Hogwarts house like you saw them in your study of the night sky, this officially licensed accessory will have you feeling like you’ve secured your destiny—even if you’re not strolling the halls of Hogwarts. Wrapped in the cozy, black, knit scarf, you’ll be ready to continue reading the stars and honing your astronomy magic without a pesky professor assigning star charts you’ve had completed since kindergarten.

Whether you’re studying Orion’s belt or masquerading as a Hogwarts student as Scorpio season begins, this cozy and colorful scarf is the accessory you need! Covered in cosmic versions of each Hogwarts house emblem, you’ll be ready for every magical moment spent under the stars!