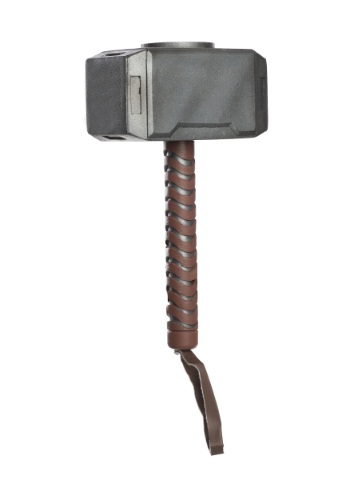 Mjolnir is one of the most recognizable weapons in Marvel Comics. Seriously, multiple storylines have been written around this mystical hammer. In some cases, Thor cannot lift the hammer due to becoming unworthy. This obviously turns his world upside down, as his history and identity are strongly tied to Mjolnir. Luckily, we know you are more than worthy of wielding our official licensed Thor Hammer!

This hammer was forged by the dwarf king Eitri in what is non-surprisingly called, The Forge. Being almost as old as time itself, Eitri has created a number of weapons at the request of Odin but none were as powerful as Mjolnir. This sledgehammer-style weapon was forged using the energy from a dying star. Odin and Thor have had plenty of time wielding this powerful weapon, but now it's your turn. If you have a thing for ancient weapons or are a fan of the Norse god, you will light up when you get your hands on this hammer!

Questions & Answers
Q: What is the weight of this hammer