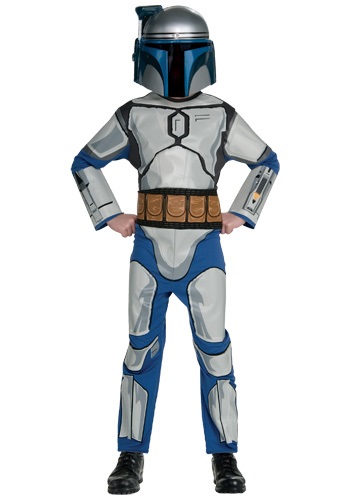 Honor is a virtue. Kind of cliche, we know, but it's a universal truth. And when we say universal, we mean it. Take the Mandalorians, for example. They started as savage raiders and conquerors. Eventually, the creed of the Mandalorians took a turn for the better. They essentially rebranded themselves as elite bounty hunters with a strict moral code. Jango Fett is the embodiment of this new Mandalorian society. He actually became the Mandalore when he was 14 years old, better known as the leader of the Mandalorian people. Unfortunately, there was a mutiny, and he was imprisoned. Being easily one of the best Mandalorian fighters and wise beyond his years, Jango broke out of prison and obtained his gear. Being a bounty hunter may not be the most savory of professions, but a job is a job, and Jango not only took his seriously but did so with honor. If you have a youngling who shows exceptional Mandalorian skill, then you seriously need to consider picking them up our officially licensed Child Star Wars Jango Fett Costume.

Did you know that a majority of the cloned Stormtroopers are based on Jango Fett? And when we say based on, be mean like, they have the exact DNA. Since Jango was such a great warrior, the Republic thought it a good idea to use his genetic template for all of their soldiers. Well, we don't know how to alter your DNA yet, but we can do the next best thing we can do and show you our Child Star Wars Jango Fett Costume. Fans of the Clone Wars will immediately recognize the detailed gray and blue jumpsuit with printed on armor. It is a must-have for Mandos in training. Pick one up today and join the action, with honor, of course.