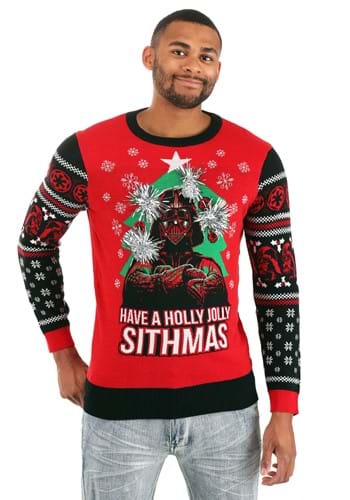 Okay, it's true. The Sith don't really seem like the festive type. They spend their time hunting down Jedi or crafting plans to dominate the entire galaxy. They're not exactly the giving type. We do, however, have it on good authority that Darth Vader celebrates a different kind of holiday. It's called... Sithmas.

Yes, during Sithmas, Darth Vader warms up a nice glass of blue milk and sits by the fire. He bakes himself a big batch of Wookiee cookies (the dark side has cookies, remember). He also polishes up lightsaber so he can practice his moves on some rebel scum. Oh, and the most important part? He puts on a very cozy sweater while he does it all.

If you want to celebrate Sithmas... or if you just need a new ugly Christmas sweater, then this Holly Jolly Sithmas Darth Vader Ugly Christmas Sweater for adults is for you! It's an officially licensed Star Wars sweater, made from a cotton and acrylic blend.  The knit-in graphics include a large image of Darth Vader on the front. It also has "Have a holly jolly Sithmas" right on the front. The sleeves also have festive patterns, making it a great choice as an ugly Christmas sweater idea!