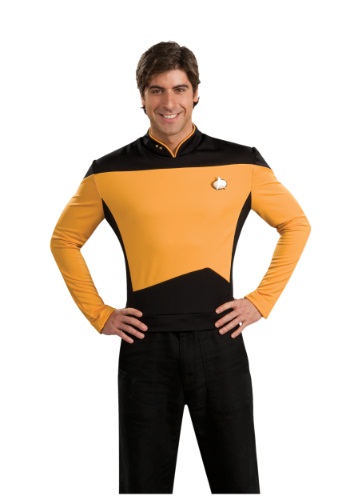 If you can understand the previous sentence (and we swear, it totally does mean something...it's not like we would just make it up or anything!), then you have passed your entrance exam for Starfleet's Operations Division! That's where the Federation sends their engineers, transporter operators, and basically anyone who's good at fixing their parents' iPhones and setting up WiFi routers. They're the ones who get to wear the gallant Starfleet gold aboard Federation vessels. And typically, they're also the ones who save the day by averting major technological disasters (like a Self-Destruct Sequence that refuses to stop counting down). So suit up in this Star Trek: TNG Adult Deluxe Operations Uniform and serve Starfleet with your technical wizardry!

Officially licensed and sure to make you look like a spacefaring hero, this awesome jumpsuit is modeled after the way Starfleet uniforms looked during the Star Trek: The Next Generation era, when Picard was at the helm of the Enterprise-D, and Data was in the front seat keeping the whole thing together. It makes a great costume for Halloween, or for your next convention trip. The uniform is also perfect if you're doing Worf or Data cosplay and you're striving for TV show-quality authenticity. And last but not least, it also includes the iconic Starfleet combadge and enough collar pips to choose your own rank! So start brushing up on your technical vocabulary and beam aboard with this Star Trek: TNG Adult Deluxe Operations Uniform!