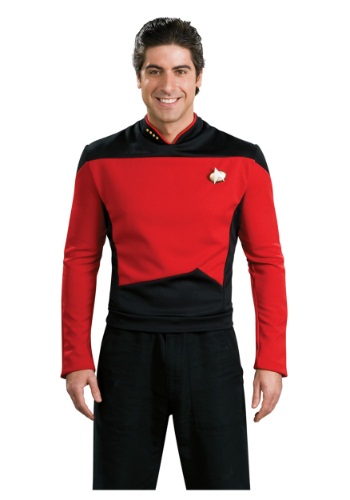 Now, we all look into the wide stars in the night sky and dream about exploring the space between. We ponder what strange worlds we might encounter and what species we will meet. We imagine the adventure of discovery and the thrill of danger. We think of commanding a star ship, transporting through matter conversions, and maybe even developing psychic abilities. At least… most of us imagine those things. A few others have some understandable fears.

See, there is a rather well-known danger in the galaxy.Red. We know the typical happenings. A red shirt was the last thing you wanted to be. The sound of Away Mission and the gleaming red uniform was like a beacon for hostile aliens and deadly phenomenon. They’d hide in their rooms, mock illnesses… but it wouldn’t matter. The danger would find them. But, that was ages ago. We might be seeing a major upswing in the old Captain Kirk days, but those tired assumptions that Ensign Redshirt was bound for doom are over. Times have changed! Red is the new Yellow! We’re talking command!

Grab some black pants and this officially licensed Star Trek top to jump into the role of the Start Trek: The Next Generation Deluxe Commander with this Uniform costume. Attach any combination of the five butterfly clasp pips to determine your rank using the included character guide—as if you’ll even need it! With this Red Command Uniform, you’ll be able to make it so, with no problem at all! Set phasers to FUN and gather up a crew for your own away team.