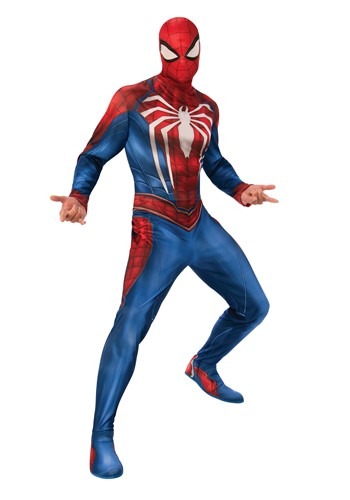 A Suit for All Seasons

Of all superheroes, Spider-Man, Iron Man, and that Bat-guy are the only ones that seem to get a ton of outfit upgrades. Spidey's super suits, though, are clearly the ones with the widest range of versatility. That's especially true if you dive through the portal into Earth-1048 and explore the Gamerverse. Not only is Spider-Man's default look there already earning some serious style points, but there are a ton of others to collect!

If you've tackled all the district challenges, you've probably earned several of them. Maybe all twenty, in fact! Go dark mode with the Stealth Suit or show your roots with the Vintage Comic Book Suit. Enjoy the '40s? Well, you'll love that Noir look. Futuristic suits from 2099 are a great option or you could even accept Stark's help and boost your regular superhero haberdashery with the Stark Suit. (You know he's got something in it to increase his Instagram rank, though.)

If you've collected them all, earned the Hidden Suit, and are still looking for Spider-Man fun, we have just the thing for you. This officially licensed Gamerverse Spider-Man costume looks like we drew it right out of the consoles and shipped it out to you. This is a jumpsuit with hook and loop fastening in the back. It is designed after Spidey's red, blue, and white look and includes boot covers and a fabric mask to get you completely into character. It's the perfect look for your movie marathons or for awaiting the next batch of DLC content. (Maybe even for your own heroic activities!)

Until this Gamerverse Spider-Man costume came around, there was only one costume even more rare in Earth-1048. Of course, we don't usually recommend running around and stopping villains in a Spider-Man mask and your underwear. (Then again, with this costume, you do have that option.)