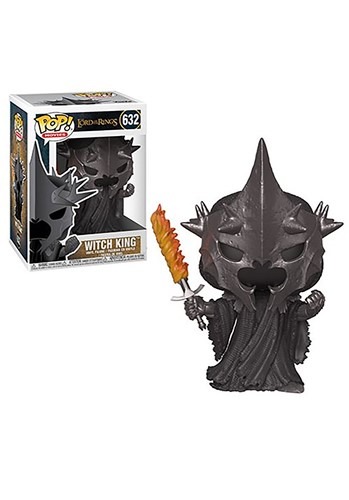 Pop! Movies: The Lord of the Rings- Witch King

Passion for the Job

Some people go through life like they're sleepwalking. They don't try and excel at anything. They wake up late in the morning, do the bare minimum at work, head back at five on the dot. Not so when it comes to the Witch King. He's had his eyes on the prize for centuries now! He doesn't stop to mill around the coffee pot in the morning to talk shop. He doesn't take breaks to watch puppy videos on Buzzfeed. And he certainly doesn't get distracted by social media. No, there's only one thing the Witch-king of Angmar wants and it's to serve Sauron and gain power over Middle Earth.

Most managers probably think employees could learn a thing or two from this fella and that's why he's such an important addition to anyone's office Pop Vinyl collection! We wouldn't want to tangle with this with-king, even at four-inches tall. With amazing details from the molded helmet to the firey sword, we're pretty sure he could still bring down death and destruction!

Lord of the Things

Want to have the best Lord of the Rings Pop collection possible? Check out the rest of our Pop vinyl catalog. With both the good and bad represented, you'll have an epic collection in no time!