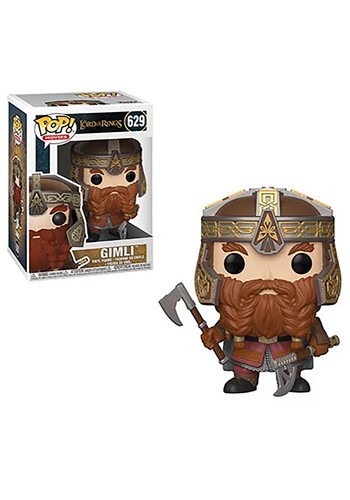 Pop! Movies: The Lord of the Rings- Gimli

Gimli has so many talents. He can run across Middle Earth while wearing full armor and carrying a battle ax. Sure, he huffs and puffs but he still keeps up with the long-legged man and elf. He can grow the most beautiful beard that no one in the Council of Elrond could ever hope to compete with. And finally, he can back sass to the noblest of Middle Earth residents without blinking an eye. In short, Gimli the dwarf is the kind of guy we'd like to have around when we get into a scrape. That is, as long as we don't get into any situations where he's got to span a large gap. We don't want to have any dwarf tossing on our conscience.

When you're collecting a Lord of the Rings figures, it would be a travesty to leave out the heroic and hilarious Gimli the dwarf. This four-inch vinyl figure is ready for anything, holding two battle axes and wearing an intricately detailed helmet. He's even got a braided beard to make us love him even more!

While we all could use a complete Lord of the Rings collection, you've got to start somewhere. Couple a dignified Legolas figure with this sturdy figure and you can imagine all sorts of competitive arguments everytime you gaze at the two of them. For the record, we don't think Legolas taking down that Oliphaunt counts as more than one either!