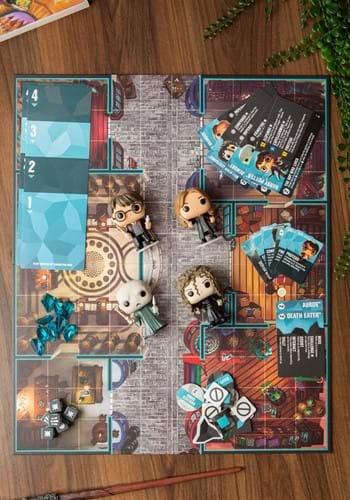 My Patronus is a Funko Pop!

The Battle at Hogwarts is over... so we thought. All the Dementors have been banished away... for now, anyway. Voldemort and Bellatrix are long gone and Harry and the rest of the team have moved on to successful, happy lives. But, those moments still ring in our minds (even if they are just tiny versions). Fortunately, we can have fun with that!

Jump into the Wizarding World like never before. Throw out your Wizard Chess and dive into this Pop! Funkoverse Harry Potter Core Strategy Game. This is a 2-4 player game that sets players to achieve the goals of four different scenarios, all while knocking out their rivals with unique spells and going for the magical points. After picking your scenario, choose your character(s) and place them on the board as shown in the guide. On each turn, characters can take two actions. You can move, challenge your rivals, or go after the scenario objectives. Each wizard also has mastered their favorite spells, too. Keep people protected as Harry Potter or unleash some helpful charms as Hermoine. These powers have cooldown rates, so take care when you utter your magic words! Knock out your rivals for bonus points as you rush to complete the scenario's objective. The game concludes at the end of a round when one player has the points needed (or goes into overtime if you land on a tie).

It's Harry, Hermione, Bellatrix, and... He Who Must Not Be Named, too!. They're ready to face off in this fabulously fun Pop! Funkoverse Harry Potter Core Strategy Game. Strategize, win points, and become the victor in the four different scenarios or dig in deeper with Ron and Draco with the Expandalone pack.