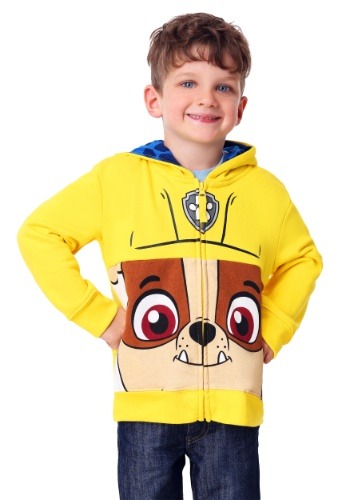 Folks tend to assume that construction workers are going to be hard-headed, stubborn, and maybe just a bit tough to get along with.  But, when you're talking about the construction-ready pup on the Paw Patrol, we've got a very different kind of bulldog!

Rubble might do all the toughest of jobs, but he's also got the softest of personalities.  Cuddling up to those ittle-bitty kitties and being seriously in touch with those pupper emotions, Rubble gives a new definition to constructive!

Let your kiddo show off their softer side when they zip up this officially licensed Paw Patrol Costume Hoodie featuring the 6th member of the squad: Rubble!  This bright yellow hoodie matches the construction vest that Rubble wears and features his wrench and bolt icon on the chest.  His grinning underbite and bright brown bulldog eyes are full center across your kiddo's tummy and the hood gives off that hardhat style!

SCOOPING UP THE FUN

Rubble is one of the members of the Paw Patrol who manages to cause a ruckus just as much as he creates stuff.  What better fun is that!?  Well, perhaps having the same kind of fun while wearing this Rubble Costume Hoodie will get your kiddo close!