If your kid loves doing the Pup Pup Boogie, then they're going to love our full line of Paw Patrol gifts! Since these gifts feature each characte from the kid's television series, your kid will be one happy little camper, whether your child loves Chase, because he's always on the case, or Skye, because she always takes to the sky. Our products include cute hoodies, t-shirts and a full selection of toy action figures, Pillow Pets and plushies. Help your kids stay warm in a cozy Paw Patrol sweatshirt!

These Paw Patrol gifts are here to save the day just like the group of scrappy little pups! It’s clear why children are so obsessed with the popular Nickelodeon television show: it’s about adorable and helpful cartoon puppies helping others out of dangerous situations. For instance, a repeat mission the pups go on is to make sure Cap’n Turbot’s boat doesn’t sink. What would Cap’n Turbot do without Paw Patrol? During past missions, the dogs have found a missing elephant, got a beached baby whale back to the sea, and even repaired an alien spaceship. It’s never a dull moment with this crew!

Any and all of these Paw Patrol toys make perfect presents for preschoolers. Don’t know what to give your niece or nephew for their birthday or Christmas? Any and all of these Paw Patrol gifts will put smiles on their faces. They’re all officially licensed, practical, and fun to play with. They can be used every day! Little kids will love having images of the cute Paw Patrol pups on everyday accessories like backpacks, water bottles, and pillows. Browse all of our Paw Patrol gifts until you find the perfect one for the little kid in your life!

The top Paw Patrol toys are interactive and will spark a child’s imagination. They’re a great way to engage in interactive play. Play with your little one and pretend to be Ryder, Marshall, Rubble, Chase, Rocky, Zuma, or Skye by crawling on all fours and barking. These Paw Patrol toys make excellent Paw Patrol gift ideas. If you don’t know what to purchase a younger brother or sister, then you’ll want to take a look at this category. Paw Patrol Halloween costumes are always a guaranteed way to kick start their imaginations into overdrive! 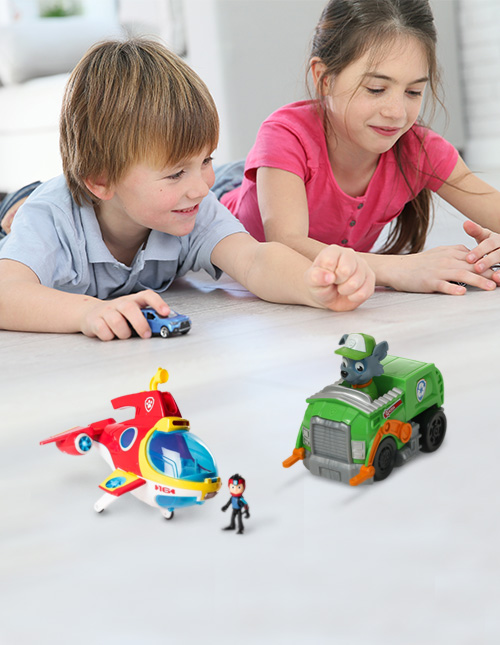 Whether your little one wants to build, dig, or dive, these Paw Patrol figures are leaping to the rescue! Our selection of Paw Patrol figures are plastic, miniature figures of your favorite heroic cartoon pups. They’re also perfect for both indoor and outdoor play. When it’s raining outside, kids will love heading up to their room to play with their Paw Patrol toys. No longer are they looking out the window and wishing the rain would stop. Now they’re packing up Chase’s cruiser for another rescue! Will they be off to save Barbie, since Ken is usually no help or will they work together to patch up Snuggles the teddy bear? But if it’s a nice day, take the Paw Patrol figures outside. Some of these toys come with vehicles that really move. Kids will have a blast using these toy vehicles in the sandbox or at the park. 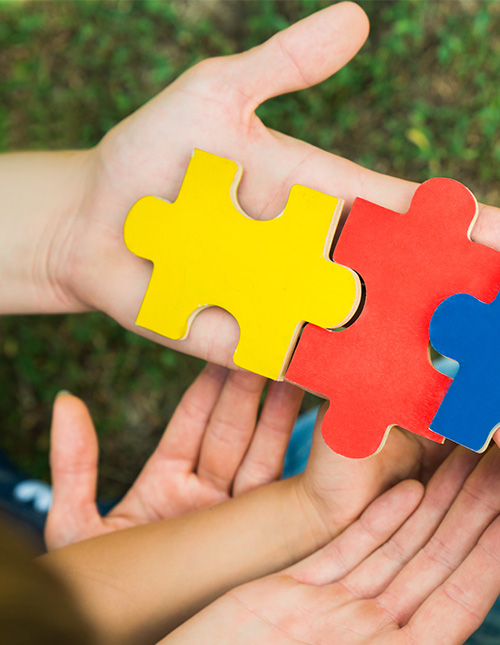 Kids who are natural problem solvers love spending their free time putting puzzles together. Puzzles are a mind-stimulating activity and a way to keep kids busy after school or at recess. They’re a fun activity for parents to work on with their children. Kids who can’t get enough of the courageous canines will love working on a wood jigsaw puzzle to reveal a colorful and inspiring image of their favorite cartoon characters. All of these Paw Patrol puzzle games have the potential to keep children busy for hours. Bond with your child by planning a fun parent/child afternoon and put together one of these jigsaw puzzles. Bring them along to a picnic or work on them from the comfort of your dining room table. No matter which Paw Patrol puzzle you choose, you will have a paw-some time assembling them with your child!

The best Paw Patrol games involve lots of fun and laughter. All of these Paw Patrol games can easily be set down on your living room floor so parents can watch their children engage in active play. Your child’s imagination will go into overdrive once they start jumping in a colorful ball pit decorated with images of Skye, Ryder, and the entire barking bunch. Kids, get ready to bring the bowling lanes into your own bedroom! The Paw Patrol bowling set is easy to use and will supply hours of fun. Just set up the colorful pins, featuring the Paw Patrol crew, and roll the included ball to knock them down! This is a great game to play at birthday parties because everyone can join in. 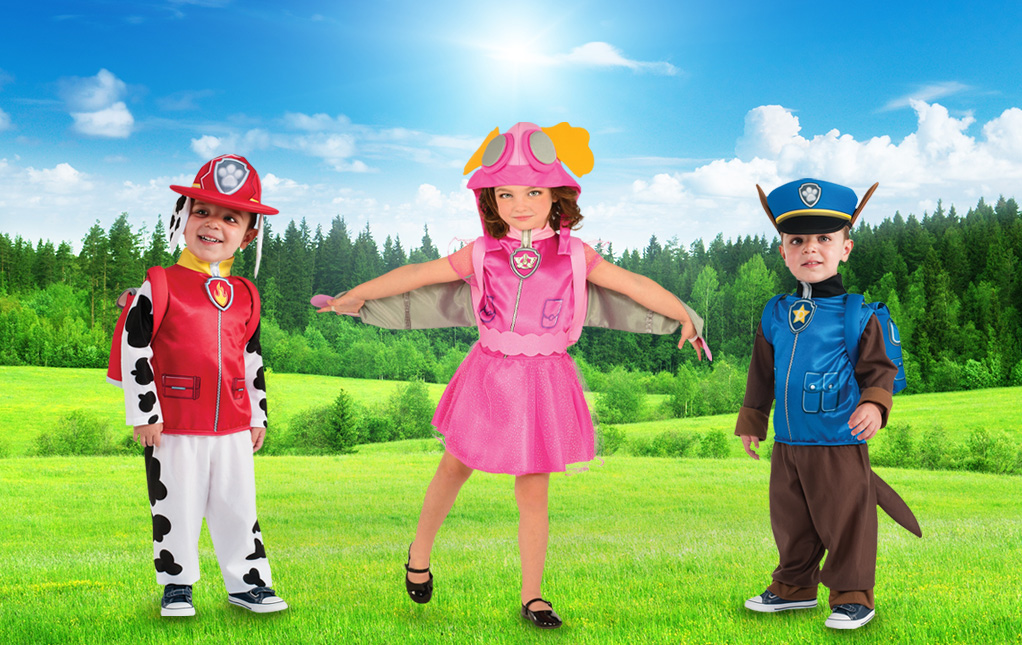 Children can transform into these fearless pups thanks to officially licensed Paw Patrol costumes. The Chase costume will become one of their favorite Paw Patrol costumes inside their dress-up chest because they’ll look exactly like the tough and quick-acting German Shepherd, complete with police hat and tail. Little girls can pretend to soar to new heights disguised in a Skye costume or have a blast putting out make-believe fires in a Marshall costume. Any of these Paw Patrol costumes are sure to get tails wagging! 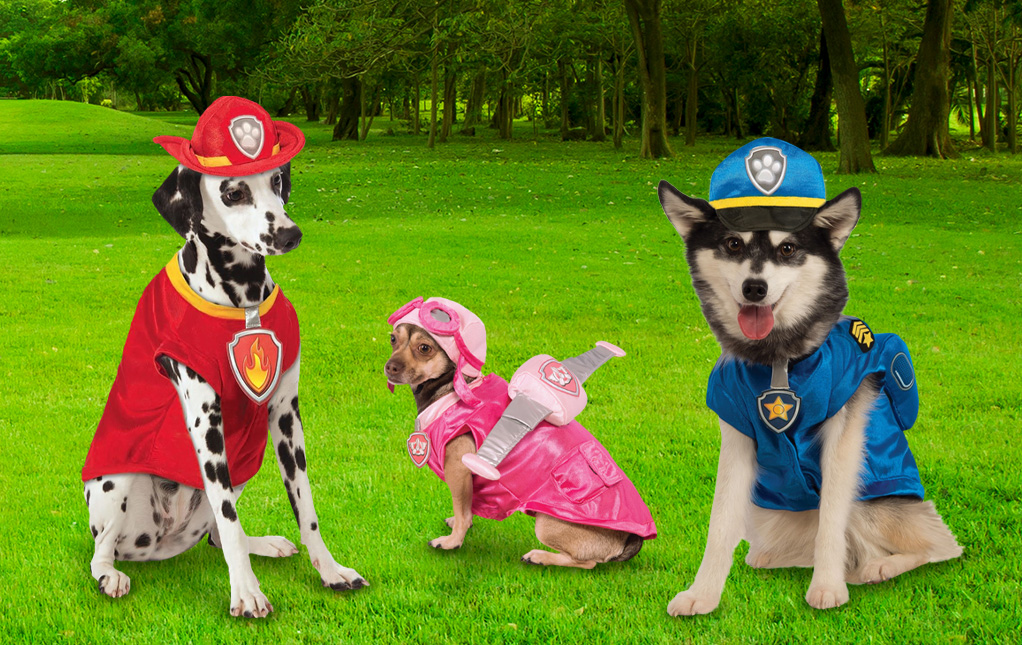 Does your pooch spend most of the day lying on the couch? Well, time to make their furry butts spring into action! Dress your pup up in the best Paw Patrol dog costumes and put them to work. No more bone-chewing and begging for table scraps. It’s time to save the day! The sky’s the limit when your pooch is wearing the Skye pet costume. It’s all-pink and comes with a pair of goggles. Kids will love having a real-life version of Skye. Dalmatians will look like bone-ified firemen in Marshall costumes while German Shepherds imitate police dogs in training wearing Chase pet costumes, even if they’re only playing fetch in the backyard!

Wearing Paw Patrol clothes adds a dash of excitement into every day. No more wearing basic tees when there are screen-printed Paw Patrol t-shirts in your dresser or closet. Kids will feel a sense of adventure when they’re wearing images of their favorite four-legged friends in uniform, plus all Paw Patrol clothes can be worn anywhere. Children will pop out of their beds to prepare for a day of school if they know their Paw Patrol clothes are waiting for them! 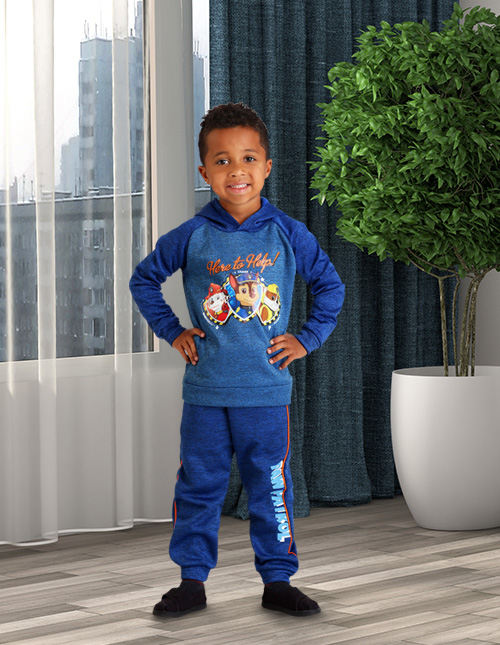 Paw Patrol clothes for boys will make them feel like superhero version of themselves. First of all, Paw Patrol clothes are as comfortable as pajamas! The shirts and pants are soft-to-the-touch, made from high-quality materials with colorful Paw Patrol printed images. Boys will love wearing them to the park, school, baseball practice, or grandma’s house. They’ll look so cute taking the family dog on a walk while they’re wearing the lovable hounds on their shirt. They’ll love curling up on the couch with their blankets and pillows in Paw Patrol clothes to watch their favorite show. Don’t be surprised if your kiddo has some extra pep in their step if they’re wearing Paw Patrol clothes. When the brave barking bunch is sprawled across your child’s clothing, they’ll be happier, cozier, and full of energy! 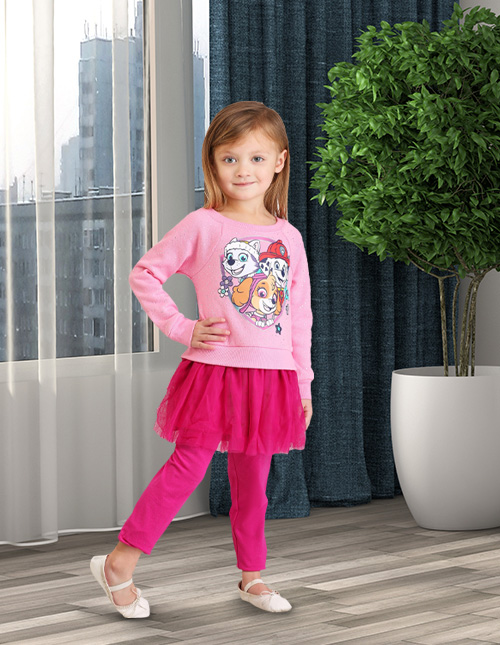 Paw Patrol is a cute, funny, and educational cartoon for everyone so of course girls like watching it too. (Come on, mom and dad, you love Paw Patrol too, don’t you?) Girls will love getting ready for the day if they know their favorite pooches are going to be with them throughout the day. Whether it’s rain or shine, these Paw Patrol clothes for girls create the perfect ensemble, no matter what the occasion. Little ones will love wearing Paw Patrol Skye clothes since Skye is the only girl dog in the crew. They’re the pink, girly, comfortable, and feature images that little girls love wearing while they’re out and about with mommy.

We know all the members of Paw Patrol have paws—we don’t think you can be inducted into the Paw Patrol without them—but if they had feet, they’d definitely wear Paw Patrol shoes. Emblazoned with images of every Paw Patrol member, the Paw Patrol sneakers are great for all little feet since they’re easy to put on and fun to wear. Kids will love putting them on and running over to the park for a day of exercise and adventure. Little ones can learn how to tie their shoes using Paw Patrol sneakers. It’s a memory they’ll always have! They’re sturdy and durable footwear that look cute, feel comfortable on the feet, and make kids happy. 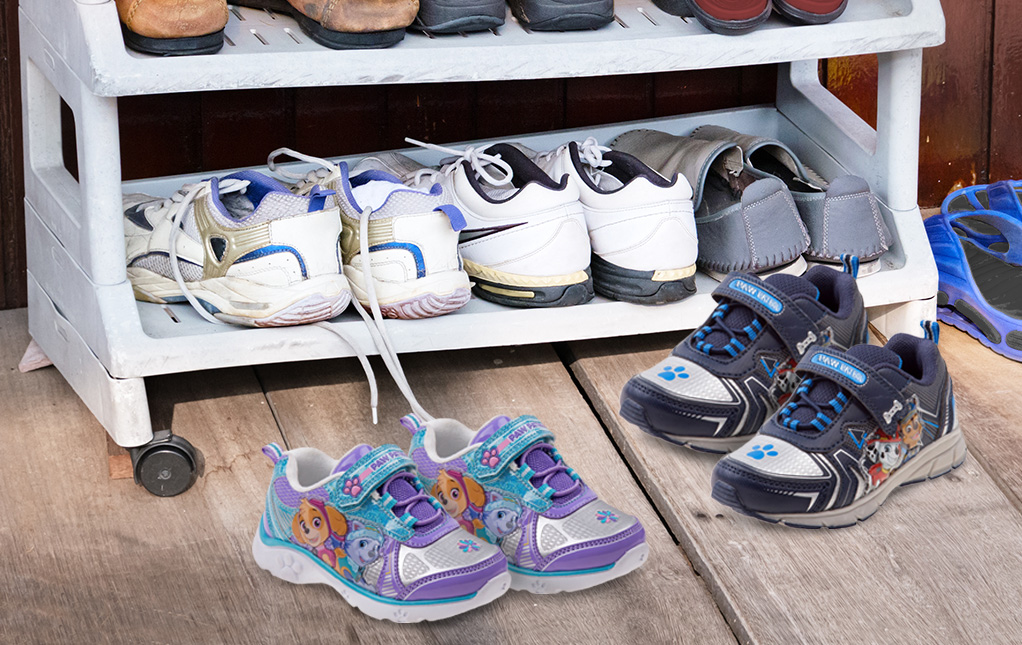 Paw Patrol shoes are awesome but Paw Patrol light up shoes are out of this world! Perfect for boys and girls, these shoes are easy for kids to put on so they won’t need any parental help. They can just slip them on and go. The rubber soles are sturdy for little legs that might not always be. Whether they’re at school, daycare, or the park, children will love looking down and seeing Ryder, Marshall, Rubble, and Chase looking back at them. Think of how cute they’ll look taking the family dog out for a walk while they’re wearing the cartoon dogs on their feet. Maybe they’ll offer to take Fido out for a walk more often?

Mom and dad, do you know about Paw Patrol? If not, now’s the time to learn. It’s the biggest show on television for children. It’s like Game of Thrones for kids! (Well, not at all, really. We’re just trying to make a comparison so you understand that it’s a must-see TV show for children.) When you’re up to date on Paw Patrol knowledge and trivia, you can have in-depth discussions with your child about Marshall extinguishing another fire or about how “Chase is on the case” yet again! We’ll give you all the need-to-know info so you can jump right into Paw Patrol with your children. It will be a great bonding experience for you two! Once you know the basics, grab a bowl of popcorn then snuggle on the couch with your little pal for a Paw Patrol marathon!

What is Paw Patrol?

Paw Patrol is a CGI-animated kid’s show on Nickelodeon where cute dogs of different breeds form a team to accomplish heroic feats. The Paw Patrol members go on one courageous mission per episode. Sometimes they save baby sea turtles and other times they rescue pizza vans. Either way, there’s never a dull moment in Adventure Bay!

What Kind of Paw Patrol Products Do You Have?

We have the Paw Patrol products that children want! We have Paw Patrol infant clothes, Paw Patrol toddler costumes, and Paw Patrol ultimate rescue toys. We even have Paw Patrol costumes for adults too. Kids will love when mom and dad join in on all the tail-wagging fun!

Why do Kids Love Paw Patrol?

Kids love Paw Patrol because it’s a great mix of adventures and morals. Every episode involves a mission and a lesson learned. Plus, all the characters have heartwarming personalities and adorable doggy faces.

What are the Best Paw Patrol Quotes?

Some of the best Paw Patrol quotes in our opinion are “these paws uphold the laws,” “no job is too big, no pup is too small,” “I’m ready for a red hot rescue,” and “whenever you’re in trouble, just yelp for help.”

What are Paw Patrol dogs names?

The Paw Patrol crew has evolved over the last couple of years. The seven original Paw Patrol members are Ryder, Marshall, Zuma, Rubble, Chase, Rocky, and Skye. In recent years, the group has expanded to include new members: Cap’n Turbot, Everest, Tracker, and Robo-Dog.

How Many Paw Patrol Characters are there?

Now there are 11 Paw Patrol characters and we think the crew will keep growing!