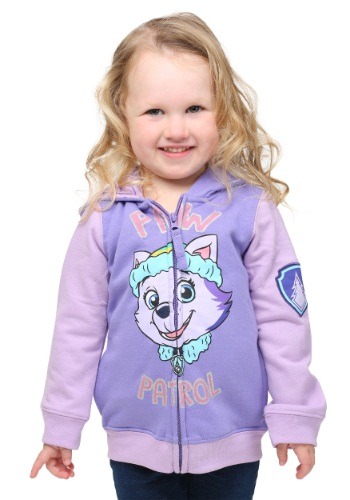 “Whenever you’re in trouble, yelp for help!”

When it comes to saving the day, Everest is the perfect pup for the job. Armed with her trusty grappling hook, she helps clear snow from the roads during emergencies behind the wheel of her giant snowplow. Everest knows everything there is to know about surviving snowy disasters, since she grew up in the South Pole. She even saved Jake from falling off a snow cliff when she first met him. It was no wonder the Paw Patrol quickly made her a part of their team. She’s a natural hero!

Everest knows the importance of having fun too, though. It’s not always work and no play. When she’s not saving people from snowdrifts or driving her snowplow, she loves to go sledding. And eat liver-flavored dog treats… or liver-flavored, anything… or just liver. What we’re saying is that she loves liver. And granola bars! And pizza!

Does your toddler love Everest? Then make their day with this Paw Patrol Everest Toddler Hooded Sweatshirt! The officially licensed purple sweatshirt is 60% cotton, 40% polyester sweatshirt fleece. There’s a printed image of Everest on the front, and a hood that comes with stuffed ears sewn on top. It’s just like something Everest would wear on one of her rescue missions! We’re afraid it doesn’t come with its own rocket-powered snowboard like Everest’s, though. Honestly, we’re not really sure where you can find something like that… but let us know if you ever do. That’d be so cool!