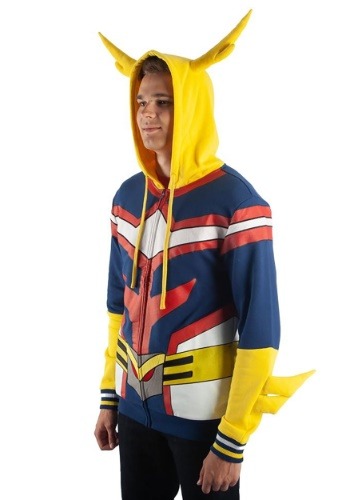 Don’t you wish that you had a Quirk? You know, like all of those lucky kids in the anime, My Hero Academia! Shooting flames out of your hand like Shoto would be pretty cool. You could use that to defeat villains or use it to cook up some delicious stir-fry. Mind control, like Hitoshi’s Quirk, might be pretty cool. You could use it to convince your neighbor to do your laundry… though that sounds a little more like a villainous use of your powers rather than a heroic one. Maybe having Tsuyu’s Quirk could be fun. Being able to leap halfway across the city in a single bound would be a blast!

Who are we kidding? The best Quirk to have is All Might’s Quirk, since he has unmatched strength, speed, and he basically invulnerable to all attacks! If we were going to be like anyone in My Hero Academia, we’d choose All Might.

This My Hero Academia costume might not actually give you a cool Quirk to use in your battle against evil. It will, however, make you feel a little more mighty in your everyday affairs! The hood is a classic zip-up style designed to look like All Might’s costume. It even has gold “spikes” on the sleeves and his locks of hair attached to the hood.

Just toss this All Might hoodie on and you might just feel fit enough to take on the whole League of Villains! It works as an everyday hoodie or as an easy anime cosplay option.