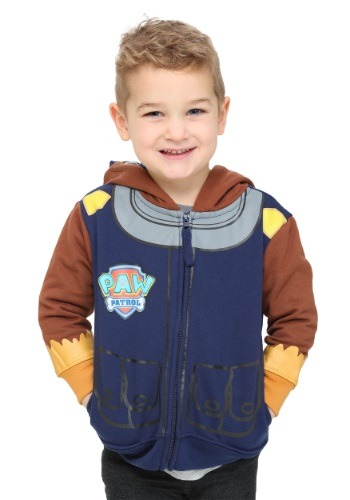 “Whenever you’re in trouble, just yelp for help!”

When it comes to lending a helping paw, no dog does it better than Chase, the loveable German Shepherd police dog (and sometimes spy) from Paw Patrol. Chase drives both a super cool police car and a super cool spy vehicle, and he uses super secret, super cool spy gear like shoes that turn into suction cups and allow him to climb up walls. When he’s not on missions, he likes to hang out with his best friend, Marshall, and spend time with his human friend Ryder. He does his absolute best to avoid the dentist, though. Oh, and feathers, since he’s allergic. Achoo!

It makes sense that your kid wants to dress up like Chase. We can’t help you find any special suction-cup shoes or Super Spy Helmet, but we can hook you up with this Kid’s Chase Paw Patrol Costume Hoodie. This stylish, officially licensed hoodie is a blend of 60 percent cotton and 40 percent polyester, and includes a front zipper along with Chase’s printed theme and logo. The hood is shaped like a police cap with a bill, and a mesh eye mask is attached with soft sculpted years. As soon as your kid puts on this hoodie, they’ll be ready to join Paw Patrol and go on its latest mission. Just make sure to avoid feathers!