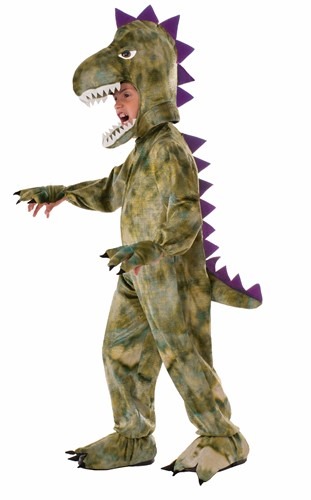 Ever since the gates to that secret island park opened, we've seen an increase in the number of reptilian buddies we have roaming around the place.  Most are actually surprisingly well-behaved.  We have to deal with a few bitey buddies and the occasional ... really gross things left just out of sight, but we realize most of those things are what we'd be dealing with normally, anyway, with the tykes that we've got at home.

If you think about it, most kids are a bit like those unpredictable dinos, anyway.  They tend to roam around everywhere and things are pretty safe until you're no longer sure where they've gone.  But, before long, you'll hear the roar for food... so, it's only reasonable that we give those kiddos a fun way to exercise their already energetic behavior while also vicariously living out their fantasies of roaming through the ancient jungles or even just the modern parks.

Help your tyke channel their inner giant reptile with this Dinosaur Child Costume.  This astounding jumpsuit features fiberfill stuffing to define those dino muscles while the dappled green print gives a clear scale look to your little monster.  Hand and shoe covers are held in place with elastic while the felt spikes along the jumpsuit give that extra little terror to their roars.  Finish off the look with the soft-sculpted dinosaur hood that features plastic eyes and felt teeth.

TIME FOR YOUR TYKE TO PRACTICE THEIR ROAR

Your kiddo was already topping the charts of adorable, but add this dinosaur look and you'll be showing just how powerful evolution can be!  Watch out for the stuffed tail because we're sure that it's going to be wagging all over the place while they charge through the house chasing after their prey.  (Hopefully, that won't always be you, but at least the padded suit will make those dino cuddles all the better!)