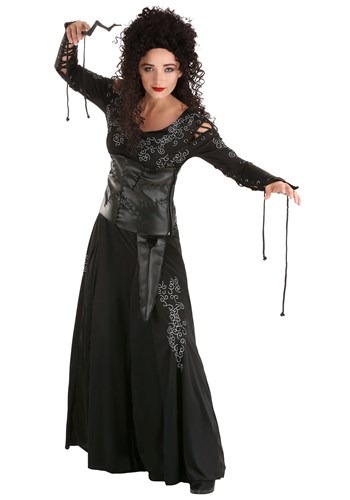 Evil wizards and witches tend to have one major flaw that ultimately brings them down. We'll give you one hint: it's their ego. The moment that they think they are invulnerable and destined to succeed, they go in on their long monologues and drop their guard. It is at that point that the hero picks up a wand, has a chance to save their friends, and brings the dark nights of evil rule to an end. From there, you're just a scary chapter in a story. Folks don't even say "He Who Must Not Be Named" anymore!

Whether you'd like to rule the future as the one true Dark Lady or try to get old Voldy to listen to some better ideas, we have the perfect look to have you cackling through the night. This officially licensed Bellatrix Lestrange costume is an exclusive design that will bring the creepiest and weirdly beloved witch from Harry Potter to life. The ensemble begins with a long skirt that flows to your ankles. The top designed to look like a lacy bodice with white scrolling under a corset that looks like wrapped leather.

She Who Must Be Named

Bellatrix isn't the type to hide in the shadows and work mysterious-like. She wants the credit. She wants the would-be goodie-two-shoes to tremble under the true power of the Dark Arts. Cackle any way you like in this Bellatrix Lestrange costume and show Harry Potter who the real Dark Lord should have been!