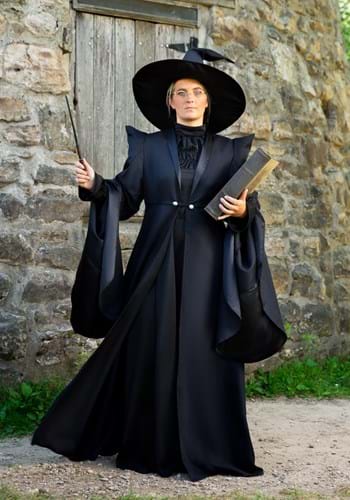 Whether you're headed out to a party for Halloween or going to your favorite geeky convention, there are certain sights that you are guaranteed to see. There is going to be a group of superheroes who are either from mismatched teams or have a duplicate pretending to be the evil twin. You're going to find a Steampunk version of other characters (probably included the previously mentioned superheroes). And, even more frequently, you're going to spot the Cat-Girl.

Now, there's nothing wrong with sporting a cool pair of cat ears on a headband and drawing some whiskers on your face. But there's one gal who knows how to channel her inner feline better than anyone else! Which gal? Well, it's McGonagall, of course! Minerva is an Animagus who loves to shapeshift into an adorable cat to keep an eye on the hosts of Hogwarts. You might say that literally turning into a cat is cheating, but that's only because you've missed a few magic classes!

Get ahead on your Animagus lesson plans when you transform into the epic Hogwarts witch with this officially licensed Deluxe Minerva McGonagall costume for adults. This is a Made by Us costume put together by our in-house design team to help you soar into the skies of the Wizarding World of Harry Potter. The costume begins with a comfy jersey knit dress. Give yourself the full look with the cloak which features long empress-style sleeves. Top things off with McGonagall's classic conical hat and it is time for magic to occur!

While you might not actually possess the ability to turn into a cat just by wearing this Deluxe McGonagall costume, you'll certainly be feeling pretty powerful. (Then again, with a pair of cat ear headbands under your hat, you can make quick work of a transformation spell!)