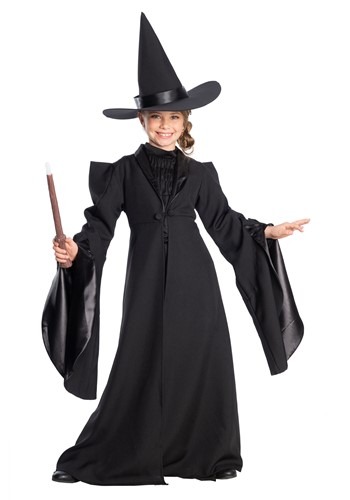 So your kiddo has approached and given you some important information. Their future career path is set. It's all about teaching for your tyke. That's a pretty awesome vocation, we do have to say, but we think that your little one's choice of the school they want to teach at is just... magical. And, frankly, it is a brilliant maneuver, too. When most declare their future profession, they're limiting themselves to one primary set of skills. Professor at Hogwarts, though? Genius!

Now that your kid is set for a future that not only includes teaching young students the critical skills they need for success, they'll also be practicing their magical charms, brewing up potions, and perhaps even developing some magical shapeshifting techniques that are bound to surprise those future students. Your tyke is going the way of Professor McGonagall, we can tell, and there's no better witch or wizard to replicate. In fact, we might be able to help...

They always say you should dress for the job that you want, so for your future Hogwarts Professor, we have this Deluxe Professor McGonagall costume, officially licensed from the Wizarding World of Harry Potter. This grand costume could have been mistaken for any standard witch look until you get into the details. The full-length dress is pitch black with a deep V-neck cut and satin lapels. Black ruffles give the dress that McGonagall edge while the long angel sleeves will feel particularly magical as your tyke waves their arms. Top everything off with her iconic, pointed hat and it's time for some spellcasting!

You could probably tell your kiddo was smart as a whip when they came up with the Hogwarts Professor concept. But, soon, they're going to look just as smart in this McGonagall costume. (After all, if you're going to be a teacher at Hogwarts, you should go for the best one there!)