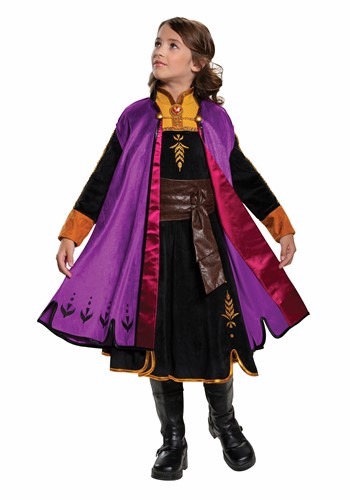 If your child could pick 1 character to become, who would they choose? Do they want to wield ever-strengthening magic powers or travel the known world with their beloved family and friends? Is there a chance they would choose both? It sounds like you’re raising a Frozen mega-fan. While your little one may not be able to portray both Anna and Elsa at the same time, they can become an adventurous and magical character by portraying just half of the sister duo!

Anna may not have the same icy magic that Elsa does, but there is no doubt that she has powers all her own. She proves that love is a magic itself in Frozen and again in Frozen 2! Following her heart to save her sister in the first story and again when she joins Elsa to support her through enchanted forests and new lands. Elsa may be the sorceress, but Anna is the restless spirit that is ready to embrace all the magic the world has to offer! When your child wants to be both magical and adventurous, Anna is the character to look up to!

Help your Frozen fan become their role model with this Anna Frozen 2 Prestige Costume! This officially licensed costume comes with 3 pieces to create an enchanting ensemble! The black velvet dress is zippered in the back and features golden trim with harvest rosemaling and is belted with the included faux suede belt. Your adventure-seeker will look royal with the purple velour cloak pulled over their shoulders. Featuring magenta satin panels and both black trim and rosemaling, this Anna look may just wield a magic of its own!

Whether your little one wants to relive the excitement of Frozen 2 or venture into her own magical stories, they’ll be set with this Anna Frozen 2 Prestige Costume! Get them ready to explore mysterious mists and the magic of playtime as Princess Anna!