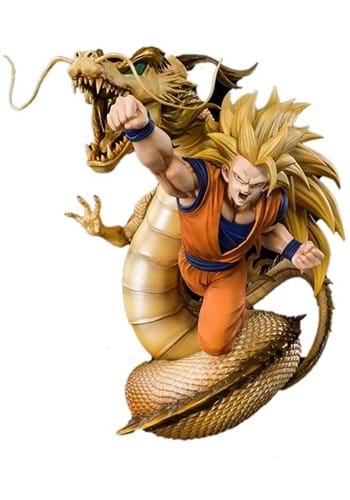 We often wonder what it might be like to fight Goku. The guy has fought Universe 7's most fearsome villains. Raditz, Frieza, Cell, and even Majin Buu have been defeated by Goku. He could probably blow up the entire Earth with a single punch! Dragon Ball Z: Wrath of the Dragon, he even punched with the full force of a dragon to finish off Hirudegarn. Yeah, it's probably best to never challenge Goku to a fight!

This Dragon Ball Z: Wrath of the Dragon Super Saiyan 3 Goku Statue captures the Akira Toriyama character in the middle of the deadly technique. The statue features Goku punching through the air with a golden dragon, resembling Shenron, surrounding him. It's not a move that Goku uses very often, so this statue will be a rare addition to your collection indeed!