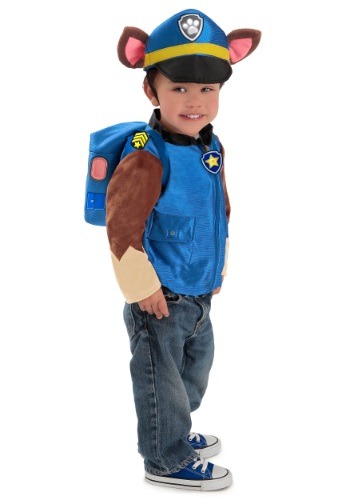 That adorable pack of canine rescuers known as the Paw Patrol needs a leader – ideally, the kind of kid who has a strong heroic streak and talks about maybe pursuing a life in law enforcement someday. If that sounds like your little guy, there's a strong possibility he has a thing or two in common with Chase, the Paw Patrol's reliable, tough, no-nonsense canine officer. As a cop dog, he helps bring a sense of law and order to chaotic situations. There's a lot of responsibility that comes with the role, but we think your kid's up to the job. So let him become his favorite puppy rescuer with this Deluxe Paw Patrol Chase Costume!

Officially licensed by Nickelodeon, this costume is a cuteness overload that will turn any human pup into the most heroic member of the Paw Patrol in an instant. It comes in Chase's signature police blue, and includes his trusty pup pack, a vest with furry sleeves, and, of course, the police-style cap with an adorable set of of doggy ears. The costume also includes the all-important pup-tag, a personalized symbol carried by each member of the Paw Patrol. Chase's has the shape of a star badge, symbolizing his dedication to police work. All in all, this is a great little outfit not only for Halloween, but also any old time your kid wants to go on his own Paw Patrol mission!

And if his friends want to come along, make sure to have them check out the rest of our awesome Paw Patrol costumes!