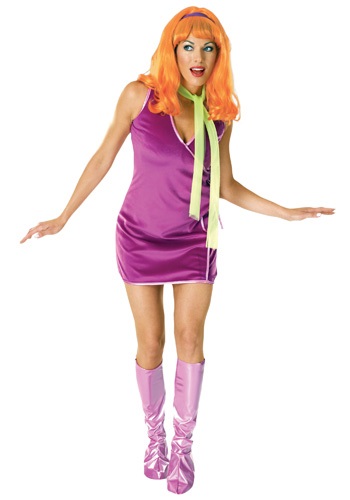 Do you love solving mysteries? Do you value being a part of a group that brings down nefarious schemers and evil-doers? Obviously, yes to both! It sounds to us like you’re one part of the famous Scooby Gang! Now we just need to figure out which one you are. Are you a leader, someone who says what’s on their mind, a brain, or the best kind of friend? We knew it, you’re a Daphne! Without another word, you need to pick up this Women’s Scooby Doo Daphne Costume!

In this bad-guy-busting outfit, you’ll have no problem figuring out who’s haunting the local coal plant and why (hint: it’s the professor, and because he invested in the new building that’s going to replace it)! Just make sure that you always split up the team to investigate the scene the same way (you, Freddy, and Thelma in one direction; Shaggy and Scooby in the other)—apparently, it’s the only way the system works without fail.

This iconic outfit is perfect for any sort of crime-solving shenanigans! The fuchsia velvet dress is cut in the classic style of Daphne, and is hemmed in lines of lighter fuchsia. A lime-green scarf and pink boot covers are also included to make sure the look is as authentic as possible. Finally, this orange wig helps you stand out and really become the most outspoken member of the whole crew. Just remember, no matter the distress you’re in, keep your mind on the motive because that often gives away the bad guy in the end!

Worthy of a Scooby Snack

With this outfit on, you’ll be solving crimes in no time at all! Now all you have to do is tell us how Scooby learned to talk (or at least, sort of talk). That’s definitely something we’ve been curious about for a while.