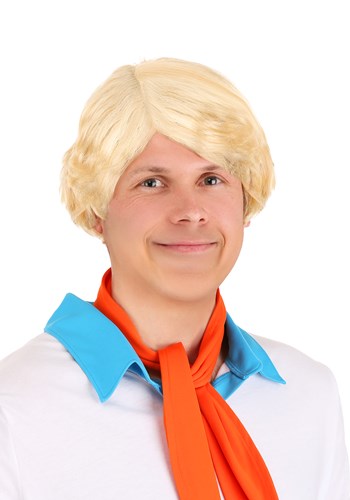 Everyone knows the iconic song of Scooby-Doo. The squad is doing their best to solve a mystery and their favorite Great Dane has gone vanished, right? That's a pretty logical assumption, but it seems that there is a secret meaning hidden in the lyrics. Scooby Doo is actually looking for a 'do of his own... a hairdo.

It turns out that the answer to the song has been right on top of Fred's head the whole time. Just imagine Scooby's delight when he dazzles his admirers with a head of golden hair! Fred better be careful or he'll lose his place as the leader of the Mystery Machine's crew.

Whether you want to give Scooby a makeover or bring Fred Jones to life, you can start your quest off right with this officially licensed Scooby-Doo Fred Wig. This is a head of synthetic blonde hair on an elastic cap that was put together our own Made by Us design team. It's styled like your favorite animated characters and ready to complete your look!

Don't ever wonder where your Scooby Dooby Doo hairdo has gone! When you have this officially licensed Fred Wig for Men, you'll already have the whole mystery solved. Of course, now you just need to find the rest of the Scooby Squad... but that's a whole different case.