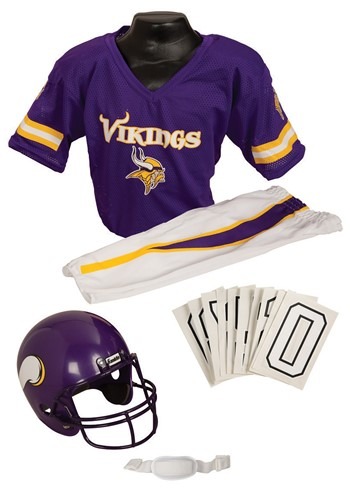 According to more recent archeological discoveries, it doesn’t look like the adventurous Viking explorers and adventurers of old actually wore the horned helmets. Looks like the tales of Valkyrie warriors chosen to ascend to the epic meadhall of Valhalla in preparation for Ragnarok, the most violent battle for the end of days, may have yet been true… but there were far fewer awesome-looking helmets than we thought. Mostly just art and poetry and epic battle. But, even if those horned helms were only a thing of fantasy (as opposed to the obvious truths of the one-eyed Allfather, Odin), we can still celebrate our own cultural history, especially in the snowy winterlunds of Minnesota. Cheer “Skol!” because it is time to don your own warrior’s garb.

Everyone has got their own way of showing their support for the team they love most. Maybe you like to go to the actual stadium to watch the action in person from the stands, cheering the Vikings on while they work to defeat their cheese-loving Pack-rats. Perhaps you’re better suited in your home turf, grilling up dogs and burgers before watching the game on your Sunday afternoons. Maybe you’re giving those horned helmets a real reason to exist!

No matter your choice of ritual, you can don this officially licensed NFL Vikings Uniform costume and you’ll have just the right look and the perfect spirit to bring your team to the goal. Show off your passing skills whenever someone asks you to toss them a soda. This sleek ensemble comes in Minnesota’s trademark purple and gold, and includes the official Vikings logo and, of course, the horns on the helmet, just like the uniforms worn by the players on the gridiron. Team up with your friends in matching uniforms, or have a rivalry with any of them while they wear those notorious other colors. Just remind them what Ragnarok is all about, though, and which team gets winged warrior women versus … cheese?