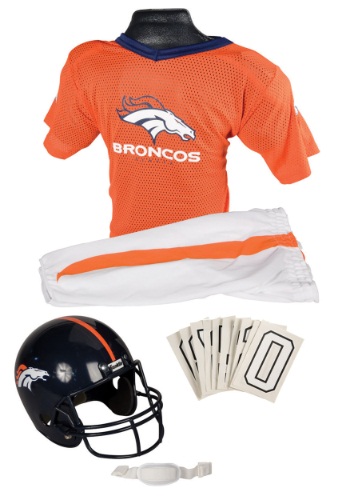 Does your kid run football plays in the backyard, snatching footballs out of the air in order to preform the most glorious of imaginary touch-downs? Do they hear invisible crowds cheering them on while they do their happy touch-down dance? Do they scream plays at their friends and tackle each other on the grass? Well. It sounds like your kid is into football.

And why wouldn't they be? This sport is pretty exciting. Full grown adults run careening into each other in an attempt to knock their opponents out of the socks, all while chasing an elusive brown ball. Some of the players are super fast, speeding down the field like a blur of color. Some players have arms like catapults, slinging the ball dozens of yards down the field. And other players? Well they operate like giant walking walls defending their teammates. These guys are pretty impressive.

So we can understand your kid's admiration. As a matter of fact, we'd like to encourage it. Do you know what's better than imagining they're a famous football player? Dressing up like one of course. And your kid can in this Kids NFL Denver Broncos Uniform Costume. It comes with an orange Broncos jersey with name and logo printed on the front, white pants with orange side-stripes, a black helmet with the team logo, and iron-on numbers for the jersey so their costume can be customized (this is not meant for actually playing football). In this outfit, your kid could look exactly like their favorite Broncos player. Which of course will make that imaginary crowd in the backyard scream with even more excitement. Trust us. We checked.