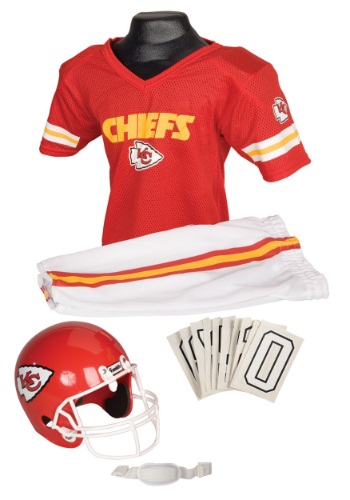 Your little Kansas City fan is probably the biggest Chiefs aficionado in the entire world. He's got every piece of team merchandise under the sun, and sometimes it seems like everything he owns is some combination of red, gold, and white. Clearly, he's ready for the next level of fandom, and that means giving him the one experience he hasn't had yet: the feeling of putting on the uniform of his favorite NFL team and looking just like his heroes. That's why this NFL Kansas City Chiefs Uniform Set is the ultimate gift for the Chiefs fan in your life!

Officially licensed by the NFL and produced by Franklin Sports, this awesome set has everything he'll need to get suited up and ready for action on game day. That includes the pants, the jersey, and, of course, the helmet. Best of all, the back of the jersey is blank, so you can iron on whichever numbers he wants... whether it's the number of his favorite player, or one that he chooses himself (and yep, the iron-ons are included!). It'll be a great look that's worthy of your kid's dedication to the Chiefs, whether he's suiting up for your game day celebration, dressing up for Halloween, or heading out to throw the pigskin around with his buddies.

However he decides to use it, the NFL Kansas City Chiefs Uniform Set will let him prove to the whole world that the team has no bigger fan than him. Just be sure to check out all our football accessories (like eye black) so he's ready for the big game!