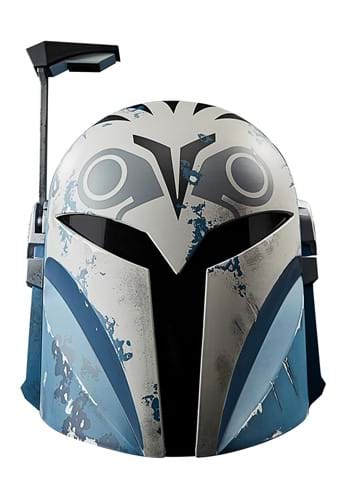 The Expert of War

If you're a Star Wars fan who loves complex stories and awesome battles, then we bet you are a huge fan of the Mandalorian Bo-Katan Kryze! With many ups and downs in her story, Kryze lived quite an epic life. Now, you can memorialize her in your Star Wars collection when you grab this Star Wars The Black Series Bo-Katan Kryze Helmet.

From being a lieutenant in Death Watch to becoming the Manda'lor and placing claim over her homeworld, the planet of Mandalore, Bo-Katan is easily one of the most incredible characters in the Star Wars universe. Sure, you may agree that she didn't rightfully gain the title of Manda'lor since she failed to win the Darksaber in combat. However, you can't deny that she was deserving of wielding that ancient and powerful weapon. Not really her fault that it was a gift.

This Premium collectible accessory perfectly resembles Kryze's. It is colored white and blue, like the rest of the armor she wore as a member of the Nite Owls. The scuffs and scratches she earned in battle are also included. This replica is even electronically powered and able to function as a real-life Mandalorian Helmet! Proudly display it among the rest of your Star Wars collectibles or top off your Bo-Katan Kryze cosplay costume with this perfect replica helmet.