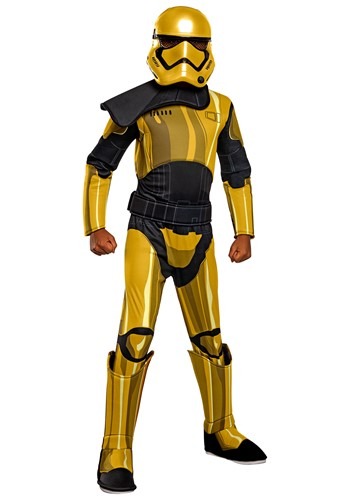 Have you ever wondered why some Stormtroopers have shiny-colored armor? It's something that we've thought about a lot in recent days. First, there was Captain Phasma in her shimmering chrome armor. Now, there's Commander Pyre, from Star Wars Resistance, and he's sporting his glimmering gold armor. What does it mean? We have a theory.

You know how different martial artists have different colored belts? Like in karate, a brown belt is higher than an orange belt, and a black belt represents mastery of the skill. We think that putting a fresh gold sheen on your Stormtrooper armor must be akin to getting a black belt! If that's the case, then Commander Pyre is one serious dude! If your child wants to have the mastery of Commander Pyre, then perhaps it's time for them to gear up in this officially licensed Star Wars costume!

This Star Wars Commander Pyre Costume is a deluxe kids costume that will have your little one ready to take control of the First Order forces! The costume begins with a black and gold, full-body jumpsuit with plenty of printed details to help recreate his look from the series, Star Wars Resistance. The legs end in boot covers, so your child can wear any pair of shoes with the costume. The shoulder pad has a look inspired by classic Sandtrooper armor from the original trilogy. Finally, the mask tops off the whole look. It has a mesh visor for vision and comes in that matching gold color scheme!

The Black Belt of Stormtroopers

If your child wants to be a master Stormtrooper, then it's time to suit them up in this Star Wars Commander Pyre Costume for kids. He'll be ready to carry out the orders of the First Order in deadly style!