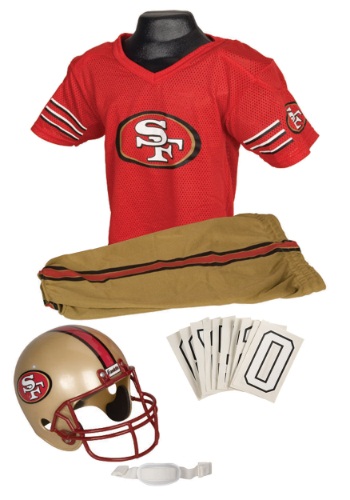 There are so many fans of so many football teams across the country, and certainly each team has something going for it. The Pittsburg Steelers have won the most Super Bowls. The Denver Broncos have racked up the most touchdowns in one season. The Chicago Bears managed the biggest point differential when they beat Washington 73-0. But honestly, in their heart of hearts, everyone knows that none of these teams can hold a candle to the San Francisco 49ers.

Even its name is cooler than other teams’ names. Denver Broncos? Boring. Green Bay Packers? It’s a name about packing cheese, for goodness’ sake! But the 49ers are special. They’re named after brave and hardy prospectors who showed up to California for the 1849 gold rush. That’s a lot cooler than naming your team after dolphins or browns (whatever those are).

Now you can pass your 49er pride on to the next generation with this San Francisco 49ers Kids NFL Costume. The officially licensed football uniform looks just like the ones worn by your favorite players as they take the field. The red jersey comes with an “SF” logo printed on the front in black and gold, and the back is left black so that you can iron on any of the included numbers to imitate your favorite player. The gold pants have red and black stripes down the side, and the gold helmet has an “SF” logo on the sides and a snap-on chin strap. Help your kid suit up and watch them score the winning touchdown!