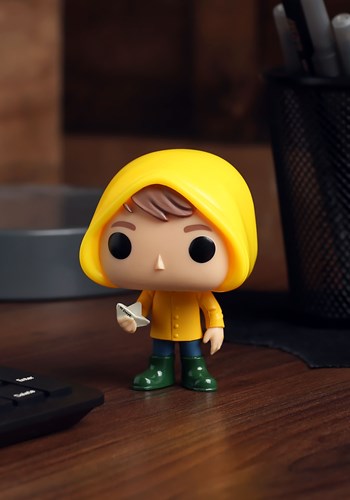 Tragedy in books is frustrating. We know what's about to happen and there's no way to stop it. No matter how hard we try, we can't stop Romeo from ending it all as his love sleeps like the dead. We might want to speak for Frankenstein's monster when reading Mary Shelley but nothing can be done for the frightened and misunderstood creature. The same problem goes for poor Georgie. When he's chasing his boat all the way to his fate we want to scream at him to forget it. Don't peer into the storm drain, a horrible end is waiting for you! But there's nothing we can do and there really wouldn't be much of a story if it wasn't for his untimely end. So here's a tribute to this adventurous young boy before he even thought to float!

Whether you're a fan of Stephen King's original novel, "IT", the original movie, or the unsettling remake, you're sure to love having a figure of the boy who caused the Loser's Club to band together and fight the timeless entity that lives under Derry. He's holding his runaway boat and clothed in his yellow raincoat. Pair him with Big Bill and the rest of the club for a collection that's almost as epic as the story of IT.