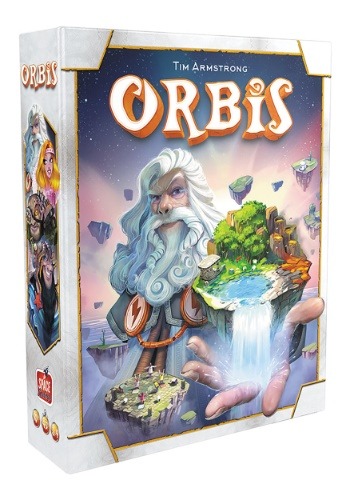 A World for your Worshipers

Did you ever look out into the far reaches of existence and wonder what else is out there? Of course, you have! That's really what all deities do. There's an entire cosmos of worshipers out there, just begging for a wonderful world to reside in where they can give praise... (or maybe tremble in fear over your frightening power).

Really, we're not judging. You be whatever kind of god you want to... so long as you're creating a great world for your folks to dwell in, we're sure that you'll become the most powerful god in existence in no time!

It is time to bring your world into being. So, gather up your fellow gods and start up a game of Orbis! In this 2-4 player game, you are deities that are constructing your universe in the aether. Your worshipers are lost among the strange lands and it is your goal to bring them all home while creating a world that is beautiful to look upon! Each round, you'll pick one among 9 Region Tiles in the center and collect the worshiper tokens that surround it. Then, place the acquired tile in front of you. As the game proceeds through 15 rounds, new tiles will appear. These may be worth Creation Points but might also require a sacrifice of your worshipers to get them! Build your tiles in front of you in such a way that you get as many points as you can... but make sure your tiles follow region rules or you'll lose points. At the end of the 15 rounds, count up your points and see who has the ultimate universe!

They say that you have to put into the world what you want to get out of it. That's especially true when you're building your very own universe! Become a mighty god of Orbis and show the others who is the supreme deity around here!