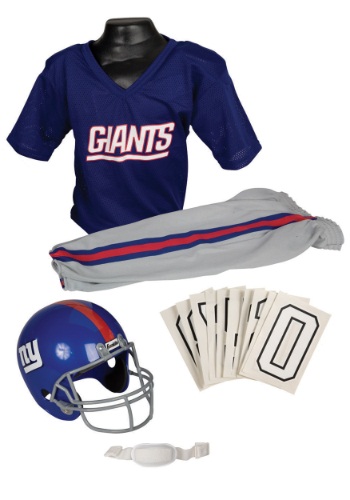 So we hear the McCullogh’s just moved from Boston into your next door neighbor’s house in your North Jersey suburb. That’s all well and good. They seem nice--they even invited you over to watch the game next Sunday with your kids. Little did you know, though, that they would all be wearing Patriots jerseys and shouting “Tommy Brady is the best of allllll time! NO ONE DENIES THIS!”

Well, obviously, you can’t let that obscenity stand. So pick up this NY Giants NFL Uniform Costume and toss it on next time you guys have a neighborhood backyard two-hand touch game going on. The McCullogh’s won’t know what hit them, as seems to be the case every time the Pats have to play the Giants in the Super Bowl (bazinga!). In this outfit, you can feel free to re-enact David Tyree’s famous helmet catch, or how about Odell Beckham’s one-handed TD? Or you could just imitate Eli Manning’s famous...blank stare...just to rub in the fact that your Big Blue bested the supposed “Greatest of All Time” not once, but twice, on the world’s biggest stage.

What’s more, if you really want to rub it in, take the costume’s included iron-on numbers and mark yourself Number “18-1.” That’ll really get the message through to them. And though we have to note that the helmet is not safe for actually using in football games, you may want to keep it on anyway, just in case the friendly new neighbors start throwing scraps of food at you. Have fun!