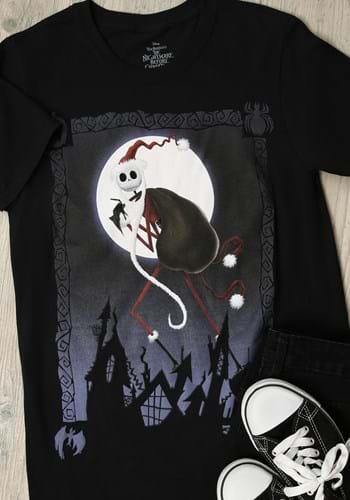 So, it’s the question that everyone brings up this time of year. What’s your favorite Christmas movie? You often hear the same old responses year in and year out. You know what we’re talking about. Like, the one with the boy who shoots his eye out or the other one where no one believes that Santa Claus is really Santa Claus so they have a trial about it. Then, there’s the controversial choice. It’s OUR choice. It’s The Nightmare Before Christmas.

Yes, naysayers often try to claim that the Tim Burton film is indeed NOT a Christmas film, but we beg to differ. Just look at the evidence! Santa Claus plays a major role in the story. Presents are delivered to many good people… even if some of the gifts were rather terrifying. Snowfall happens and there’s even reindeer! That’s enough for us to declare it as a bonafide holiday movie, which is why you can wear this Nightmare Before Christmas shirt during Christmas with a smile on your face!

This men’s shirt is a comfy cotton shirt based on the classic movie and it has Jack Skellington on the front. Just slip it on for the holidays or add it to your everyday rotation!

And finally, go ahead. Tell those naysayers that The Nightmare Before Christmas is TOTALLY a holiday movie!