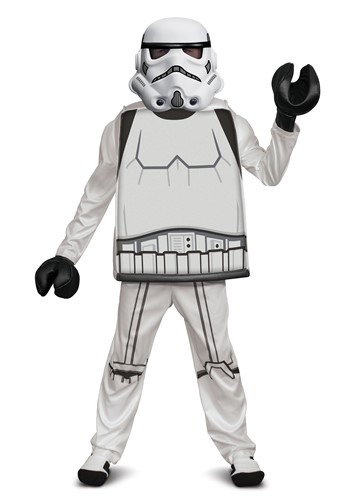 The True Heroes of the Empire

Everyone always wants to be a Jedi or Sith Lord for Halloween. Sure, they get all the praise, recognition, and (most of all) screen time, but what about the ones out there really putting in all the work. We are of course talking about the Stormtroopers! Those soldiers are the reason why the Jedi were able to take on all those droid armies. They were also the reason why the Empire was able to rise to power. They did some good. They did some bad. Either way, all orders were followed.

If your little one is ready to join the ranks of these elite warriors, we have just what they need. This Deluxe Lego Stormtrooper Costume will be the perfect start to their career as an aid to Lord Vader and the Emperor. You may think Legos are all fun and games but not when it comes to Stormtroopers. They are in it to win it and wipe out all the rebel scum!

Your kiddo can become the blocky Lego version of a Stormtrooper this Halloween with ease. This costume has all the details you know and love from the Lego Star Wars videogames and the mini figurines found in LSW building sets. It will look like one of your own minifigs suddenly grew 100x in size. Hopefully, you don’t have any droids around that the Empire is looking for, or you may have some explaining to do.

When you have a child that loves both Legos and Star Wars, then first you must thank the universe for making you so lucky. Next, it is your duty to give them the best of both worlds this Halloween. Thanks to this Deluxe Lego Stormtrooper costume, that is pretty easy. Now, just grab him a blaster and he’ll be ready to go!