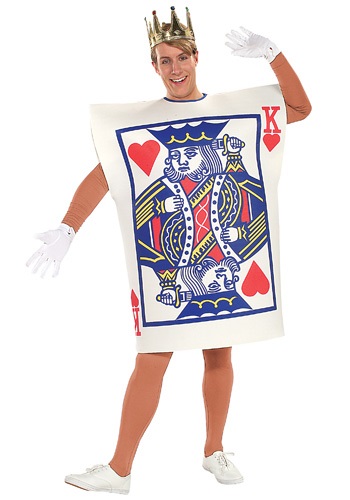 THE KING OF HEARTS

If you are dressing up as the king of hearts, we think you can expect some good luck to be coming your way. After all, you ARE dressed as one of the best cards for a lot of luck games. Wear this into a casino and make your millions, one hand at a time. A little bit of luck and a little bit of skill and you might never have to work again!

This costume is about as simple as they come. It's simply a tunic that you pull over your head. There are armholes in the sides and a hole for your head. The tunic is shaped and detailed to like like the average deck of cards. We feel like we have played with this one before, the king on this deck certainly looks familiar! Because you are a king, it only seemed fitting that we include a crown for you to wear. The crown is plastic and is set with fake gems!

Sure, the king of hearts is good on its own. But, if you pair it with the queen of hearts, the jack of hearts, the ace of hearts, and the ten of hearts? Well, you've got yourself a royal flush! We can't think of a better poker hand or costume! Wearing those cards with some friends would certainly make a group costume that is hard to beat.