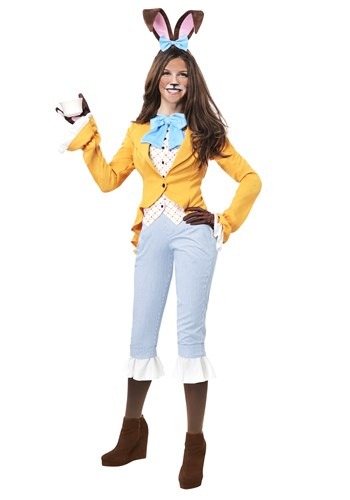 Humor Us, Would You?

Question: Does it happen to be your birthday? No... Well, in which case, we're prepared and would love to wish you a very merry unbirthday. An unbirthday can be just as happy as a birthday, you see? It's simply any day that isn't your birthday, a pretty simple concept, but its level of simplicity depends on who's describing it. If a Mad Hatter and March Hare are describing it the explanation would take much longer.

Another couple questions: Are you good at puns? And if so, can you wrap them into a word puzzle? If you are talented at talking in riddles and have no concept of time you'll find that you fit in quite well as the March Hare at the mad tea party!

A Wonderland Tea party may be a little topsy-turvy but that's no reason for it to be a less than a formal event. Whether you're staging an unbirthday party or you're going as the March Hare for Halloween you'll meet the Hare's standards in no time. The mustard yellow waistcoat is figure flattering with belled sleeves and includes both a bunny tail and coat tails. You'll be ready for tea with the oversized blue bow tie and adorable pantaloons. Unless it's your birthday, you're sure to have a happy unbirthday in this cheerful ensemble.

Keep those pinkies in the sky. It doesn't matter if you're into Earl Grey or if you prefer a nice herbal blend, because with all the ruckus, bluster, and riddles, you're unlikely to get a sip in edgewise at the mad tea party. Hey, don't get mad! You're the one chopping tea cups in half. Your party with the Mad Hatter and the dormouse is hardly about the tea, it's really about confusing anyone who happens to pass by. And congratulations, ya'll got us, too.