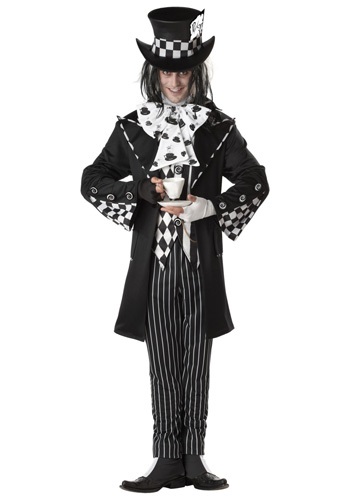 We got a hold of little Alice some time ago and asked her to recount her stories to us as well. It was not all happy tea times and fluffy rabbits as Caroll would have you believe. Alice tells us that it was more like a warped nightmare, with twisted buildings, giant bugs, and a psycho queen who wanted to decapitate everyone she met.

The other characters weren't anything like the story book either. The Mad Hatter for instance. He wasn't all about sugar and cream, while sprouting happy nonsense. Well, there was nonsense, but mostly it was the Hatter muttering about hats trying to squeeze his brain out, blood being used for red hat dye, and how he wanted to size down peoples heads to fit the hats.

One might think that Alice would've been a bit freaked out all this. Turns out she loved the morbid macabre madness she found. It was apparently Lewis who got a bit uncomfortable talking about duchesses with butcher knives and giant hares who liked to eat squirming things. That's why he lightened everything up for the stories.

However, we're with Alice on this one. The dark crazy Wonderland sounds soooo much more interesting. As a matter of fact, we're intent on visiting. Would you like to come along? Word of warning, apparently we'll be better accepted in Wonderland if we dress appropriately. You could, for instance, wear this Wicked Mad Hatter Costume. It comes with pinstripe pants, a mis-matched vest, black jacket, and black top hat with plenty of black and white checkers and swirls. There's even gloves and boot spats to finish off the look. You'll look delightfully morose in this outfit and should fit right in! A word of warning, though? Alice told us to avoid any mushrooms down there. She specifically said we should stick to tea. We think that's good advice.