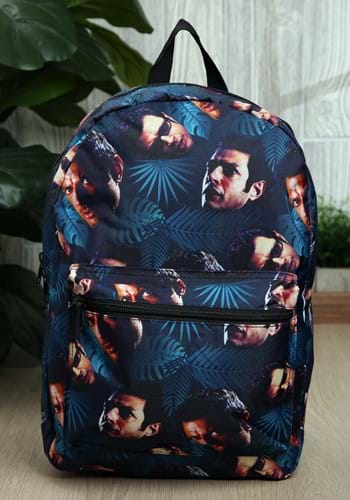 What Have You Done?

Your scientists were so preoccupied with whether they could that they didn't stop to think if they should! They studied Jeff Goldblum's character, Dr. Ian Malcolm. They watched Jurassic Park. Then, they rewatched it again. Once they'd banked every single scene featuring Jeff Goldblum, they got to work and created the most dangerous backpack known to humanity.

That's right... they created this Jurassic Park Jeff Goldblum Backpack. He's escaped from his enclosure. The goat is long missing and the lawyer is already on the run. He's hiding in bushes. No guest is safe with this backpack on the loose!

Alright, so maybe we're being a little overdramatic here. This Jurassic Park Jeff Goldblum is pretty harmless. In fact, it's almost just as charming as the actor himself and it's useful for carrying around all of your necessities! The pack has an all-over print of Ian Malcolm's face in various poses from the movie. It also has tropical plants to help add that Isla Sorna feel to it. It has length-adjustable shoulder straps, a generous primary compartment, and a small front pocket. It's great for everyday use... or for the random trip to a theme park filled with highly dangerous dinosaurs!