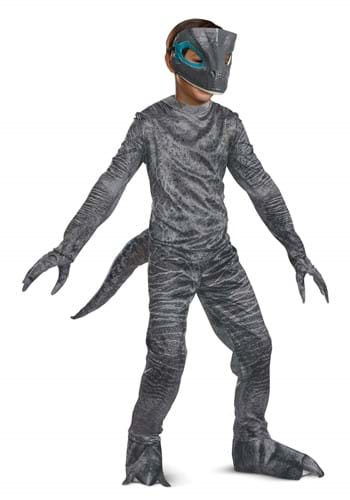 When Dinosaurs Rule the Earth

It truly was inevitable. John Hammond made that first dinosaur in the first Jurassic Park back in 1993, and that was the moment we knew that dinosaurs would eventually take over the world. The Jurassic World movies only seem to confirm our suspicions. Dinosaurs are everywhere! They're swimming in the oceans, flying through the cityscapes, and tromping through our parks. And we say... if you can't beat 'em, join 'em! With this Jurassic Park Deluxe Blue Costume, your child can become their favorite dinosaur from the Jurassic World series, and they can join in on the prehistoric fun!

Your child can indulge in their inner dino when they wear this officially licensed costume! The costume is inspired by the iconic velociraptor from Jurassic World, blue. The jumpsuit even comes with her signature blue stripes on the back! The suit itself comes with a grey, scaly pattern on the exterior to mimic the skin of Blue. The jumpsuit also comes with attached foot covers that are shaped like dinosaur claws. The sleeves come with matching dino-claw mitts and the mask really rounds out the look! The mask is molded into the shape of a velociraptor face, and it fits with an elastic band in the back. When your child suits up, they can blend right in with the rest of the dinosaurs!

It's no secret that kids love dinosaurs. There's just something awe-inspiring about the prehistoric creatures that the Jurassic World series captures so perfectly. But it's also something that adults can enjoy! You can team up with your child when they wear this Kid's Jurassic Park Blue Costume by pairing it with any of our other exclusive dinosaur costumes. We have sizes and styles for any fan of dinosaurs (young or old).