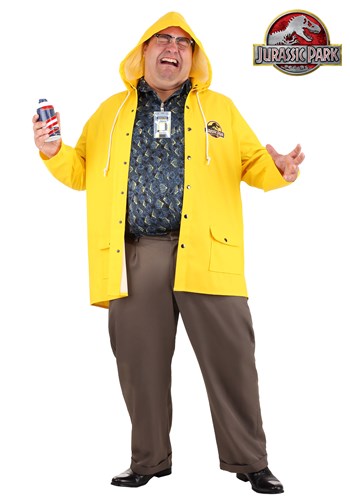 ...You didn't say the magic word! You know, some might say that Dennis Nerdy -- erm, Dennis Nedry, we mean -- was well within his rights to be upset about his salary. We don't know what his salary was, but we assume a computer programmer in the 90s, working on one of the most delicate and dangerous experimental projects humankind had ever embarked on could command quite a large paycheck! He's gotta earn his keep. But, even though Hammond "spared no expense," evidently it wasn't quite enough for the plotting Nedry. But does that justify what he did? NO. Hit LinkedIn or the classifieds next time, our guy!

Whether you consider his antics fueled by greed or merely misguided, he cemented himself and that can of Barbasol in pop culture history! That's why we teamed up with Universal Studios and Amblin Entertainment to design a costume based on Nedry's iconic final get-up. Officially licensed, so you can have confidence in the stitching, printing, and the like, the costume includes the villain's raincoat with Jurassic Park logos and a removable hood, a print shirt, your very own Jurassic Park badge, and a pair of glasses frames sans lenses. Just add your own photo to the park badge to make it your own!

With this epic Jurassic Park costume, you will have potentially scored yourself a little side hustle to smuggle dinosaur embryos off of Isla Nublar. We hope it goes better for you than it went for Nedry himself!