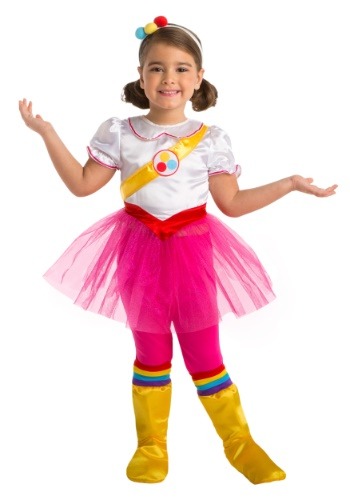 You'd think that living in a giant mushroom and making sure a Rainbow Kingdom is safe would be a lot for a nine-year-old girl. In the preschool-oriented Netflix series, True and the Rainbow Kingdom, it seems to be right up True's alley. She's great at investigating the problems in the city. Like that time the river started to flood. She could have been overwhelmed and avoided the issue. Instead, she dove below the river's surface and found a scared puffy fish stuck in a vent. She calmed it down with a lullaby spell and the river went back to its placid ways. This colorful costume is a great way to show your little girl that she can make a change as well!

This adorable little costume has an adorable white satin top with colorful details. We love the peter pan collar and the subtly puffed sleeves with ruffled cuffs. The pink tulle skirt fluffs out from a red satin waistband. The colorful headband tops off the costume and matches the yellow boot covers with rainbow cuffs.

It's not often that you can find a show that has a main character that shows so much patience, caring, and problem-solving. She's so responsible that the Rainbow King knows he can come to her for help whenever he needs to. Even her trips to the wishing tree require her to sit down and talk out her problem with her friend Zee before she heads off with the magic the tree bestows to her. While your kiddo probably wouldn't mind taking a trip to the Rainbow Kingdom, you can bring a bit of the Kingdom to her with this colorful costume. And hey, she can always pretend your household pet is a talking cat named Bartleby!