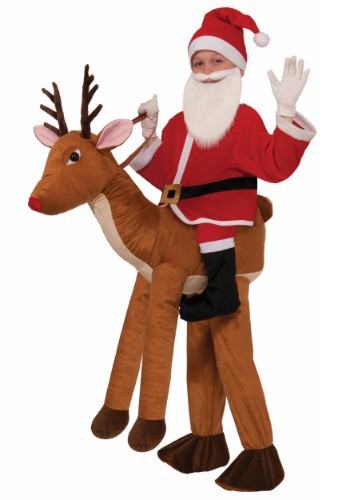 Let's face it, everyone wants to be the big guy in the red suit and we don't blame them. There are a ton of Santa costumes on the market these days because of it. Most traditional St. Nick costumes feature lush crushed velvet fabric and a shiny gold buckle belt, to perfectly recreate Santa's famous and endearing image. But maybe your little guy doesn't want a traditional Kris Kringle look; maybe your little guy doesn't want to look like all the other "Santas" at his school Christmas concert. If that's the case, well mom and dad, you're in luck.

If your child wants to be unique, get noticed, and have a festive costume for the upcoming holiday festivities at school, then this ride a reindeer costume will definitely be his cup of cocoa. Diverging from typical Santa Claus costumes, this ensemble also doubles as a sweet holiday illusion. Your kiddo will look like he's riding the North Pole's most famous reindeer, Rudolph, once he's outfitted in the fiberfill suit. His bottom portion will look like a reindeer, while his top half is undeniably St. Nick, creating the appearance that he's handling Rudolph's reigns and taking him for a little ride.

Not only is this an imaginative costume that will put an unforgettable holiday twinkle in your child's eye but anyone who sees it will light up with pure glee. Pick up a beard and a pair of white gloves and he will have the exact look pictured here. This Santa/Rudolph combo costume just might make him the coolest kid in Christmas concert history!