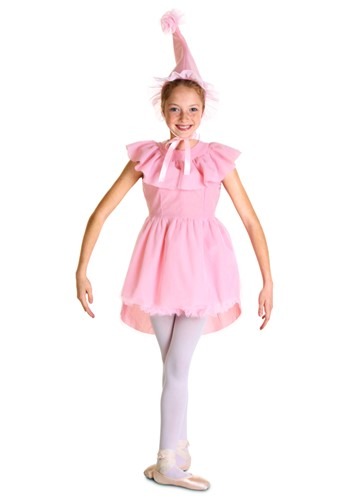 Time for Your Big Number!

Living under the Wicked Witch of the East's rule was such a drag! She was so evil and mean that she hated to hear the sound of anyone enjoying themselves by singing, dancing, or otherwise having a good time. Whenever you wanted to rehearse a show, you had to do it in the utmost secrecy. But now that the witch was crushed by a flying house piloted by a little girl wearing a gingham dress and carrying an adorable dog, you're free to dance and sing as much as you want, whenever you want. How lucky that the number you were practicing just happened to be super appropriate for the moment!

Ding dong, the witch is dead! Celebrate with your munchkin friends in an adorable, exclusive Kids Munchkin Ballerina Costume! Look sweet as a rosebud in the light pink sleeveless dress with a moderate high-low skirt with a gathered waist and a hemline trimmed in ruffles. The neckline has a wide ruffly collar that flutters beautifully through each plie, arabesque and grand jete. The matching hat has a pointed Munchkin-style crown and its brim is decorated with more ruffles. It ties under the chin with a pretty satiny ribbon!

If You Only Had a Costume

No need to follow the yellow brick road and ask the wizard for a great dancing outfit! This one is perfect for performances, Halloween, or simply playing make-believe. The Land of Oz has never seen a dancer as wonderful as you!