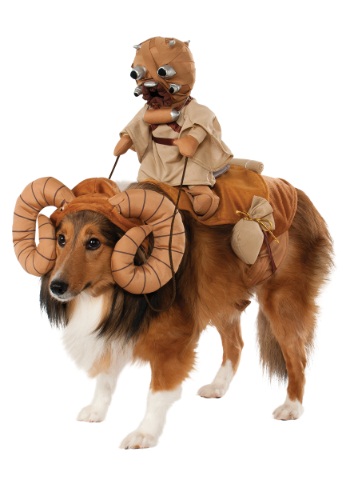 If you're smart, you'll listen to Ben Kenobi and you're not going to mess with the Tusken Raiders. Yeah, they might be easily startled but that doesn't mean they're not going to come back in full force later. They've got some serious skills with their crazy staffs although they could really use some communication skills. Grunts and whistles are a little outdated, don't you think?

In all other ways, we'd love to be like the Raiders. They're tough, independent, and they're not going to get caught up in Galaxy drama. While you probably won't be able to live in the desert and no one wants to live next to a raider these days, you can have a Bantha for a pet! Sure, you can't transform your pup into an elephantine creature but you can make him look like a Star Wars puppet classic!

Good old Fido can become your dream pet with this Bantha costume. No longer will his head simply have two boring ears, he'll also have two large, curved horns with a brown cap and reins. A Tusken Raider is sitting on your pup's back holding the reins. This costume is detailed with a  metal studded puppet and a bag of coins attached to the saddle. The saddle attaches with a hook and eye strip around your dog's chest and belly. The horned hood is separate. With this new costume, Fido is sure to give your local mailman a real run for his money. After all, if there's anything Bantha's are good at, it's raiding!