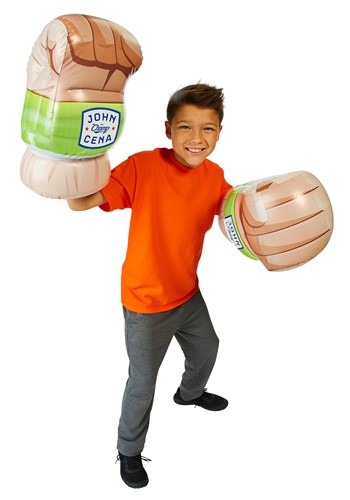 We wish we had the hands of John Cena. That might sound like a rather strange statement but just think about it! John Cena has defeated just about every wrestler in the business with those mighty hands. He's pummeled and clobbered every villain who's challenged him. He's got a pretty mean right-handed lariat for anyone who says differently! He's even risen to the title of champion using nothing but those hands! Our hands? Well, we mostly type stuff on a computer...

But the good news is that with these WWE Airnormous John Cena Muscle Arms, you get to transform your normal hands into the devastating fists of the WWE's greatest modern star!

These WWE Airnormous hands come with a pair of inflatable muscle arms, complete with toy versions of John Cena's mighty fists. Just inflate them, place them on your hands, and get ready to pummel the competition into submission! They're officially licensed from the WWE and they're an easy choice for anyone who wishes their hands could go toe to toe with Roman Reigns! You can pair them up with one of our John Cena costumes to help you feel like the champ himself!