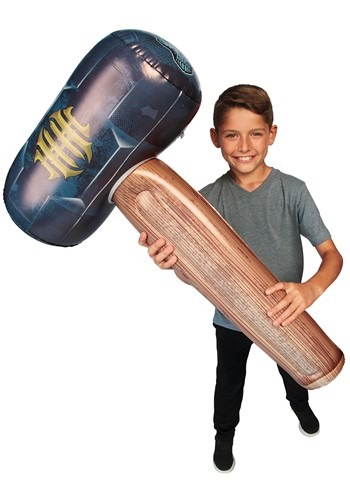 Does your child want to lay the Smackdown on his opponents? Does your child feel like following in the footsteps of Triple H? Does the idea of letting your child run wild with a real sledgehammer send a chill down your spine? Well, no worries! With this WWE Airnormous Big Bash Triple H Sledgehammer, your child can feel like the WWE wrestling star without all of the danger of an actual hammer.

This officially licensed toy hammer brings your aspiring wrestler a safe version of Triple H's signature hammer. It's inflatable and features a faux wood and metal patterns to make it look like a real hammer. It even has Triple H's monogram on the head. It measures 36 inches long and is intended for ages 4 and older. Of course, since it's a toy, inflatable hammer, it's much safer than the average hammer from the hardware store.

If your child wants to be just like their wrestling hero, then it might be time to equip them with this WWE Airnormous Big Bash Triple H Sledgehammer! Pair it up with any of our officially licensed WWE costumes to help your child jumpstart their own wrestling career!