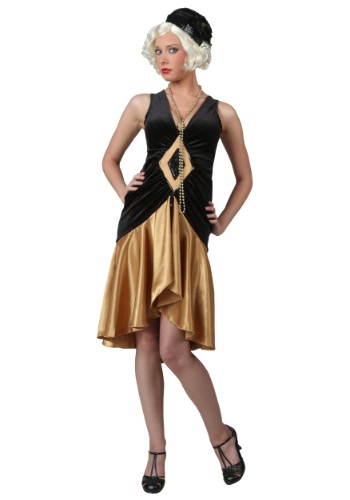 Your friend, Marcia, is throwing one of her famous themed costume parties next week. The theme this time: things that roar. The intention is probably for people to dress as a lion, or tiger, or maybe a howler monkey or something like that. But those costume are all so...obvious. And you’re not the kind of person to make the obvious choice. So think a little outside of the box and subvert the party a bit by picking up this Women’s Plus Size 20s Flapper Costume!

Seriously, what roars louder than the 20s and the women who popularized the iconic flapper style? They showed their legs, danced to jazz, had their own jobs and educations...heck, they even began driving cars and flying planes! It was a big deal back then for women to embrace that amount of independence. Not to mention, this all took place in the Roaring 20s. We don’t think any costume can roar louder than a flapper or be a more fun twist on your pal's theme!

This outfit will make you the coolest cat at Marcia’s party—and that’s saying a lot, since there will be a bunch of jungle cats prowling around. The pullover dress has a dramatic “V” neckline and a diamond-shaped sequin ornament at the waistline,  guaranteed to help you stand out in any crowd. This classic look also features an asymmetric gold satin skirt and a black velour hat with an attached flower. Now all you need to do is accessorize with some flashy jewelry and maybe a pair of heels and you’ll be ready to dance all night!

No matter what animal face paint Marcia applies for her party, it won’t even come close to the loudness of your roar as you enter the room in this clever costume. So have fun being the best dressed and overall coolest person there. It's only natural for a flapper!