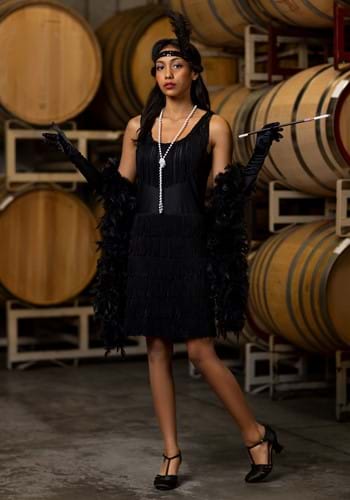 A Touch of Attitude

You don’t take no for an answer. You go after what you want, and you don’t feel bad for enjoying the pleasures you take part in. So when your friends host a costume party with the theme of “Famous Men of History,” it’s pretty obvious what your costume is going to be. This Women’s Black Fringe Flapper Costume is perfect for flipping the party’s theme on its head. Your friends might say it’s not exactly in line with the party, but that’s what you flappers are known for—ignoring societal convention!

So when someone asks what famous man you’re trying to be, strike a dynamic pose, whip out a cigarette, and...ignore them. Instead, start swinging your way across the dance floor, showing off your flair and your bold, independent style. And knowing you, you’ll add so much fun to the party, everyone will be jealous they didn’t think of undermining the theme like you did.

This fierce and fun look comes straight from the loudest decade of history—the Roaring 20s! And as such, it has no problem stealing the show everywhere it’s worn. The sleeveless pullover tank dress has seven (seven!) rows of fringe and a scoop neckline lined with sequins. The sequined elastic headband features an upright feather and a hook and loop fastener in the back. This costume has everything to turn you into one of the iconic flappers that defined their own timeless fashion. Just make sure to accessorize with some flashy jewelry and some scene-stealing heels, because this is your time to make some noise!

A Hit That Won’t Be Forgotten

In this costume, you’ll make such a splash at the party that no one will ever think to exclude an entire gender in the themes of the future. That’s sort of the legacy of the flappers, too. That’s great work!

Questions & Answers
Q: I am typically a size 4 in a dress. My chest is 32", waist is 31.5" and hips 38". I am unsure what size to order. I know the recommendation is to go with a larger size; however, I am wondering if a medium will be too snug in the hips and too large in the chest. Any recommendations? (1 Answer)
Asked by Anonymous | October 21, 2022