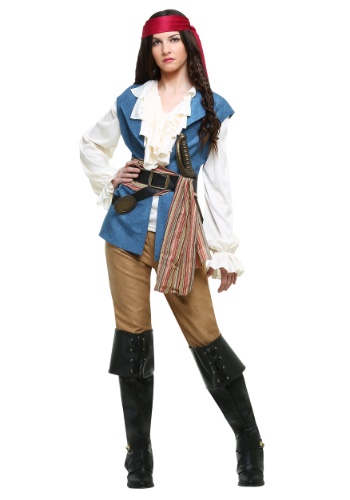 Aye, heed our words, matey. We know you don't take any flack, but you will take that treasure map off that sleeping curs hip in the grog house, thank you very much. Serves him right for having more rum than he could handle. The seven seas have been on your side for a while now. When you took to the seas a while back you knew you'd love that free sensation, an open horizon greeting you every morning. Then you climbed to the crow's nest and you were hooked. The view from up there was beautiful but dangerous, just like you.

There are tells on the seven seas of a luvely pirate wench, as tough as old Blackbeard himself. Aye, she be the comeliest lass that sails beneath the jolly roger but she's as slippery as an eel and she'll hornswoggle ye all the sudden, like a mighty black squall. Seadogs through the Seven Seas are speaking her name though no one knows where this scallywag lass be comin' from.

You pirate duds came together slowly but surely. You nabbed the white ruffled shirt in a game of cards in Barbados. The blue vest you got from some sniveling landlubber on an enemy ship, the red scarf same from the hem of a skirt from your former life. The pants were the trousers you made yourself when you decided to leave the hearth behind and embark on your seafaring life in this Seven Seas Sweetie Costume.

You're really making a name for yourself! It's no wonder that pirates throughout the seven seas are talking about the best female pirate who's sailed since Anne Bonny. Just remember to acquire your sword and pistol, the world won't acquiesce to you every request for no reason. With your navigation skills, your sharp tongue, and your famous wit, respect for the newest pirate isn't about to dissipate anytime soon!